The station was dark save for a few emergency lights spaced around the walls
which were already beginning to dim. Another descending stairway could be seen
across the floor. A quick look at each other confirmed their unspoken course of action
and they sprang forward, jumping over the turnstiles and ran down the lifeless escalators
on the train platform with their weapons raised and ready. The platform was even
darker than the station above, with fewer lights that were dimmer but bright enough to
confirm they were alone. Corporal Hester began reaching for his night vision device
only to be stopped by his companion.

"There's not enough light for good night vision and the locals aren't going to
shine under thermal. We're better off with torches," he informed the NCO as he pulled
his own tac light from a pouch on his vest and secured it the side of his machine gun
before turning it on. Hester nodded in agreement, placed his own light on his M4.

"Now… I guess we're just gonna have to wait for the next train," Case responded
blankly as he looked out into the darkness of the tunnels stretching in either direction.

"Yeah? Well it better come around soon, we've got an hour on these lamps unless
you brought extra batteries," Hester said. It was phrased as a statement, but intended as
a question, he couldn't remember whether or not he had any spare AAs.

Case turned to tell him he had a handful of batteries somewhere in his assault
pack when the tomblike quiet of the subway was interrupted by the shaking of the gate
they'd locked with their flex cuffs. Anguished, ravenous and hateful wailing followed
the sound, pouring down the enclosed stairwell that focused and amplified the horrible
sound, one that no human should've been able to produce.

"Man, I really hope those assholes can't break those cuffs," Hester said pensively,
looking up towards the stairs leading up.

"If they can, I think we'd be entitled to a refund," Case deadpanned as a high
pitched whine slowly filled the tunnels.

"Thank fucking god," Hester moaned as the soldiers slid to the edge of the
platform for the incoming train, their bright LED lights pointed in the direction of the
oncoming public transportation to signal their presence.

A very surprised looking train operator stared at the lights as the train passed at
full speed. At first, it gave no indication of stopping as the two men watched car after
car of brightly lit civilians whip by them. Abruptly, the train lurched to a stop, as
though the driver had to think about picking them up or not. The sliding doors opened
with a squealing whine and a cleanly dressed soldier stood in the doorway to the
passenger car, his M4 held across his chest, but his hands held it ready to use at a
moment's notice.

"What are you doing here?" the burly soldier, whose patches identified him as
Sergeant Pike, demanded sternly without moving aside.

"We got separated from our unit," Hester summarized, taking the lead as senior
enlisted. "We were informed of the ongoing evac using the subway and thought we'd
catch a ride, Sergeant."

Hester watched as Pike reached for his radio before interjecting, "If it's not too
much trouble, Sergeant, could you get confirmation on the move? There's a good
chance some nasty locals are about to insist on exceeding the maximum capacity of this
train."

Sergeant Pike hesitated for a moment before looking hard at the two soldiers.
"Have either of you received any injuries from hostile combatants?" he demanded.

"Just our sense of well being and mental stability, Sergeant," Case shot back.

"That's right, Sergeant. I'm afraid I'm going to need to see a chaplain or a shrink
as soon as I'm relieved," Hester joked, his face frozen in complete seriousness.

Pike stood still for a moment, unsure of how to respond, before finally stepping
back and allowing the two soldiers to board the car. As they stumbled in, they noticed
it was full of clean, well dressed people openly displaying expressions of disdain, shock
and disgust at the addition of the sweaty, dirty soldiers. Hester and Case ignored the
disapproving stares for a moment before they could no longer take being looked at like
hobos when they were part of the reason these people were able to escape the city at all.

"Man, I tell you, commuting in the town is murder!" Hester loudly remarked to
his companion.

"No shit! There were people upstairs willing to kill to get on this train!" Case
responded as they glared back at the faces along the car.

Sergeant Pike interrupted the display, "This is one of the last passes before we
called it a night. Street teams are getting too much resistance and too few last minute
evacuees. These here are high level business leaders in the city and were not able to leave
with the bulk of the population. Our priority is to get them to safety where they'll help
coordinate with us on getting this city back on track in the coming months.
"I'm going to need to report picking you up directly to my CO. He's a few cars
forward, so I shouldn't be long. You two will take my position at this door during any
stops this train makes until I return. Any persons seeking entry will need to be visually
inspected for wounds or injury before being allowed onto the train. If you encounter
such individuals, you are to move them away from the uninjured and push the
emergency button next to the doors and a medic will assess their condition. Any
persons attempting to board through use of force are considered enemy combatants and
you will treat them accordingly. And you are to assist Private Beaumont on the forward
door if he should require it. Am I CFB, gentleman?"

Sergeant Pike simply nodded and stomped his way towards the front of the car.
He and the aforementioned Beaumont exchanged a quick nod before Pike opened the
door and stepped into the next car. The soldiers posted themselves on opposite sides of
the sliding doors they had entered and continued to scan the disapproving faces of the
seated, nonplussed evacuees. Even the private guarding the other door, a nondescript
young man in uniform, appeared to be looking down his nose at them.

"Yeah, man, I can't say I'm really digging the vibe of this city," Hester said
conversationally to the machine gunner.

"Yeah, that's a solid copy," Case said to the NCO quietly before raising his voice
and addressing his fellow commuters. "This is a real shithole town ya'll have. This city
sucks."

Satisfied that the remarks got the civilians to stop staring, Case smirked and
looked at Corporal Hester. Private Beaumont simply snorted and turned to face his
door, putting his hands on the standard issue carbine strapped to his chest.

"Looks like we got a bitch detail, this train business doesn't sound too hard.
Except for the people, anyways. And I think our buddy up there looks too damned
young and way too goddamned clean to be fronting us like this," Hester remarked.

"Doesn't he, though?" Case hissed with a mock smile. He had already begun to
despise the contempt much of the public had for the military and this situation was
definitely not helping. Preventing further discussion was a loud pong followed by an
automated recording.

'This is Harrison. All passengers please keep the doors clear,' a distinctive man's
voice resounded through the train speakers.

The train suddenly decelerated and stopped at another poorly lit platform.
Unlike their platform, this one was full of people, idly awaiting the train. Looking out
of the sliding door windows, neither soldier could make out any features of the people
in the crowd as they peered out of the glass into the gloom and the train fell silent. The
movements of the evacuees seemed… off.

Hester whispered after a few seconds, "Man, this doesn't look right at all."

A solid thump from one of the larger windows caused loud gasps and frightful
moans from the civilians causing the soldiers to jump, their attention immediately on
the source of the sound. Pressed against the window with its hands stretched wide, was
the face of a Revenant. Its face had been torn to ribbons, exposing its blood stained,
lipless teeth. It stared into the window for a moment with the same vacant, ravenous
eyes the soldiers were becoming too familiar with and it began to quietly snarl against
the glass. The two men ignored the cowering passengers as they stared back at the fiend,
unsure of what was happening.

A second pong sounded through the speakers and answered their question as the
doors before them began to slide open. 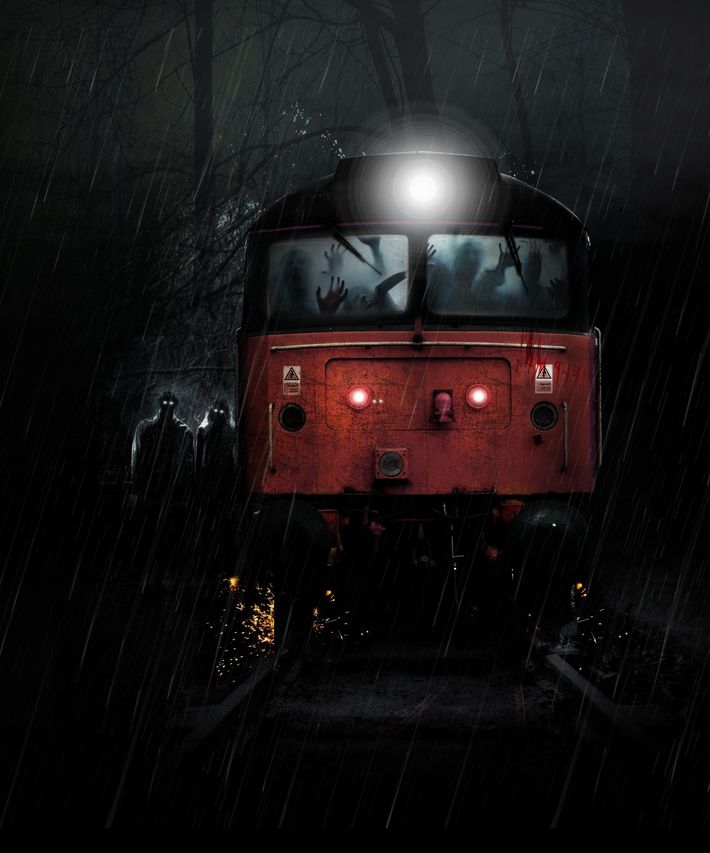 I spoke to soon you are facing a Train full of Revenant. You and Your Team Need to Evaluate!

Comment by Komrad Venessa Wicked☭ on July 28, 2020 at 2:28am
That Train Station are what Wicked Nightmars are made of. Let's Hope the Station is Safer.