The pair of soldiers sprinted down the dark streets which were illuminated by
scattered fires or flashing remnants of electrical lighting when they were lit at all. The
growing numbers of mobs taking up the chase behind them had reached the point
where neither man wanted to run the risks of slowing the pace and retrieving their
NVGs or Tac lights. And both of them desperately hoped that they would get there in
time to catch a ride out on the last train from downtown.

The men sprinted randomly down block after block, doing their damnedest to
avoid occupied areas. After what felt like hours, but in reality had been roughly twenty
minutes, the soldiers began to grow fatigued from the pace of their flight coupled with
the weight of their weapons and gear.

Slowing down at an intersection that appeared empty as they struggled to catch
their breaths and bearings. Their eyes constantly searched the environment in search of
threats hiding undetected. More often than not, they saw the dead eyes of a Revenant
staring down at them as it pressed itself up against reinforced storm glass along the
upper floors of the various buildings they passed.

Seeing them like that, watching them, was somehow more unnerving than
encountering them in the streets. And somewhere behind them, a swelling, bloated
massing of ghouls had congregated, tirelessly tracking the human soldiers through the
city.

In the dim light, the pavements seemed to be filled with everything from trashed
household appliances to body parts, unfamiliar structures rose from the sidewalks
appearing like oddly shaped greenhouses on either side of the street.

"Where are we?" Case asked through heavy breaths as he knelt down and scanned
the intersecting streets through his machine gun optics.

"Chicago," Hester answered, breathing just as hard with his hands on his knees.

"I know that, fucker," Case retorted. "I mean, do you know where in Chicago we
are currently?"

"Yeah. Chicago." Hester repeated. When Case turned to look back and level him
with a dirty look, Hester simply pointed to the sign marking the cross street. It read
'Chicago.'

Returning to his feet, Case grinned at the junior NCO before jogging over to one
of the strange structure entrances, "Thanks."

"Yeah, sure. No Problem," Hester sarcastically panted as he chased after the other
soldier.

"Think we found ourselves our exit," Case told Hester as he stumbled behind
him as he gazed at the sign above a closed gate that read: Chicago Red Line.

"Might be a bit of a bitch to get this lock off though," he said under his breath as
he inspected the large, industrial strength padlock on the accordion style gate.

Corporal Hester kept his eyes of their poorly lit surroundings, illuminated by
flickering street lamps and small fires. He noticed a sound coming from further down
the east side of Chicago Street. Looking closer through his ACOG, Hester could see the
front edge of a garish group headed in their direction caught in the strobing effects of
the flashing lights. They were shambling and sprinting in their fractured means right
towards them. He was hearing their collective growling as they closed in.

"Better figure something out fast, man. We got company about four blocks
away," he told Case with a touch of panic.

"Fuck!" Case hissed. Then after a deep breath he said, "Here, you try to bust it
open. I'll keep you covered. These motherfuckers just won't fuck right the fuck off, will
they?"

The tall soldier switched positions and began hammering the lock with the butt
of his M4. Case knelt on one knee and raised his machine gun, carefully sighted the
leading former human and prepared for another brawl for survival.

The soldier stared, transfixed by the scene, mesmerized by what he was seeing. It
happened to him every time he had enough seconds to really take in what his eyes
irrefutably witnessed. And at this point, he'd seen these non-people- and properly
ventilated them- more than he could count. Case had easily fought and killed more of
these antagonists than those he had enlisted to fight. Exceedingly more.

The private was fascinated by what they were, what could possibly have caused
their condition. If the upper echelons of the military and government knew, they
hadn't told the ones charged with dealing with them. He remembered more than a few
nights during basic training and his deployment that he had listened to or participated
in conversations centering around the fabled 'Zombie Apocalypse'. Case recalled the
boasts of his fellow soldiers of how bad ass they would be against the undead, the
wistful dreaming of so many young fighters to experience this very thing.

As a culture, the United States was more prepared to deal with armies of zombies
than with any other threat in the world, real or imagined, as far as the gunner was
concerned. Zombie media had been so mainstream for so long, it had gone out of
vogue half a dozen times in the last few years. And Case wasn't excluded, he'd
consumed well more than his fair share of undead themed books, movies and video
games. For soldiers like him, zombies were the perfect enemy- one that can be killed by
the thousands without ever leaving the marks on the souls of the killers that
accompanies bringing death to another living human being. Zombies were guiltless to
slaughter, letting professional soldiers and average people alike play out their inner
fantasies of wanton destruction, chaos and bloodshed without fearing being labeled a
murderous sociopath.

Unfortunately now that it had come to pass, Case's experiences had come to
include being witness to the events wherein some boasters broke under the stress their
fractured reality had produced and died horribly, some reveled in unexplained end times
and others simply continued on because they had no other option. PFC Case carried
the weights of those deaths, those soldiers he'd known briefly or not at all somewhere
deep inside of himself, some where he'd have to unlock whenever the nightmare finally
ended. Outwardly, he carried on, because that's what he'd been trained to do. But on
the inside, he was afraid for reasons he couldn't comprehend while finding vast oceans
of repressed rage he'd never known about that he directed at the threat.

The Revenant caught in the red circle of Case's gun sight was a large, broad
shouldered and solid looking fiend in jeans and a flannel. Its run was an awkward
loping that caused it to lean forward, like a hunchback with a spinal problem, its arms
swinging low to the ground. Blood covered the entire front of its clothing and was
smeared across its face. It had its teeth bared and its eyes were a glazed mix of
nothingness, hunger and animosity. Case watched it run through his sights for a full
block before he opened fire.

Immediately, he noticed the recoil threw his burst slightly off and he only
managed to rip huge dark holes in the creature before it was knocked back onto the
pavement. Quickly, Case switched targets and continued shooting, this time
succeeding in a kill. He rapidly swung his muzzle back and forth between short bursts,
hitting the ghouls, but not always scoring a kill.

The intensely loud gunfire rippled out through the darkness of the city. The
longer they stayed in the open, the less time it would take the roaming hordes to find
them and they knew it.

You Soliders Need  to keep Safe from those Undead Revenant... Bunker Down & Regroup. 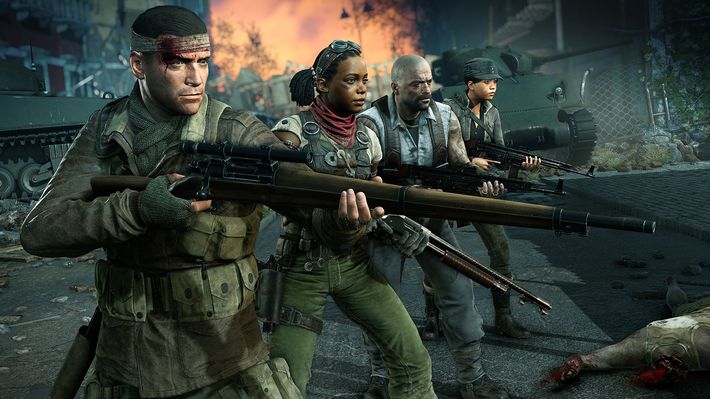