With that final thought, he committed himself through the simple act of slipping into the shadows of the lobby. The muted sound of broken glass beneath his boots conspired to ignite his trepidation, but the debris vanished within a few steps, leaving him on layers of dirt atop what once had to have been someone’s idea of tasteful marble-like tiles. His newfound night vision rapidly adapted to the gloom, pushing the blanket of darkness back. Drawing his Mk43 into his shoulder and sweeping his gaze across the interior, Priest focused on the Sensation.

Finding the first floor devoid of any threats, it took less time than he anticipated to locate the stairs leading down, an easily marked fire escape well within the building’s interior. The pair of aluminum doors visibly destroyed by something definitely not human served as a logical clue. Swiftly inspecting the stairwell, Priest noticed no path leading up before he leaned over the railing, directing his machine gun into the dark below. Nothing moved along the winding stairs, an observation that both calmed and disturbed him. The lack of aggression from the stygian depths only delayed the inevitable bloodshed. Cautiously, Priest descended into the darkness below, feeling for all the world like a heavily armed Dante wading into some unimaginable Hell where Death patiently waited.

Unearthly hisses drifted into the passage after reflecting around the hard surfaces of the floor below. Hisses that ominously enough fell silent as he approached without so much as a whisper. The smell of death rushed over him like a physical tide out of the murkiness. The absence of light provided the slightest bit of comfort, allowing him to feel as though he belonged to the darkness and not the intruder that he was in reality. In contrast, the bright red reticle of his optic left him feeling a bit exposed.

The hissing poured forth again, the concrete walls reflecting the waves to misinform his perception of their point of origin. The intonation wrapped itself in layered timbres, foreshadowing multiple voices, equating to multiple threats. Priest couldn’t be certain, having never heard it before or encountered whatever monstrosity was generating it. Wary, he eased towards the wall on his left, closing off potential attacks while shifting his interlocked stare and red dot optic across the open space. The floor evidently had been still under construction, naked columns broke his line of sight in every direction, piles of tools and equipment lay haphazardly by workers never again to return.

He crept as gradually as he dared, heel to toe, the movement feeling natural though he had no memory of his military training. Anxiety edged towards the border of panic with the realization of his isolation underground in the enemy’s liar lurking with monsters hellbent of devouring him.

The question arose in his mind if this self doubt was something he’d felt when he’d been alive, still human. The thought was rather brief though in its distraction. Brief because something launched from over a pile of toolboxes to slam into him, pushing him into the wall. Sharp claws dug into his shoulders, threatening to pierce the reinforced poly carbon fiber of his uniform. Priest barely had enough time to react, lifting his arms just enough to keep whatever fiend that had crashed into him from ripping out his throat, catching it with just inches to spare. Its hot breath poured over him, the scent a revolting blast of decaying meat.

The raging gargoyle snarled in frustration and pushed harder into him, its pressing weight providing advantage. Straining with both the physical effort and the active refusal to panic, Priest pushed back on the snapping jaws but the beast’s proximity pinned his weapon between them. Gritting his teeth, he squirmed for whatever range of motion he could gain to risk a grab at his side arm. Snatching the pistol from his hip, Priest fired several times into the fiend’s body. The creature, in sudden agony, tried to reverse itself, only to give the soldier the opportunity to raise the gun to its head and pull the trigger again. Hot liquid splashed across Priest’s face as the monstrosity fell lifeless at his feet.

Priest swiftly holstered the pistol and shouldered the machine gun, again sweeping the area. The shifting illuminated reticle stopped over the opening jaws of another hellish creature just meters away attempting to sneak towards him. In that moment he realized that the hate, violence and the seething need for retribution had come to be the only defining remains of his humanity. In that moment he found himself exactly where he needed to be. Effortlessly, he slipped his finger onto the trigger of the machine gun and executed his would-be attacker.

Obsidian sharp calm unfolded within him and like a spark to kindling, Priest seized it, existing only for his mission. Taking a rapid glance at his slain attackers, he recognized the creatures from his intensively ingrained training. Class Two, Organism Thirty-Two, a four hundred pound hexapod with wicked teeth and claws. Hunts in packs using body heat to identify prey. No venoms. Extremely dangerous in the open where they could take advantage of their numbers and speed. Not very intelligent though. Easy targets, Priest told himself.

And like smoke he slipped into the shadows that embraced him as tight as an entranced lover. Suspecting a tightening ring of the creeping thrall drawing close enough to lash enmass after the failures of the previous attempts, Priest stepped over the corpses in a trajectory unlike his last one. Applying knowledge gleaned from dozens of battles costing scores of human lives, Priest advanced. The maneuver flanked another four of the aberrations prowling where his former course would have led him. Fatally unaware of the shift in the hunt, destruction found the creatures first. Their coordinated poaching resolved in condensing the individuals close enough for Priest to fire lethal short bursts, his speed of violence beyond retaliation. The counter strike ended in seconds, the eruption of the thumping gunfire suddenly abandoning the returning silence to the hollow plastic noise of the polymer shell casings as they exhausted their inertia following ejection from his Mk43.

Estimating more than three quarters of the high caliber Mk43 ammunition remained, each application of his weapon calculated and controlled, Priest’s sense of self solidified. With a newfound confidence coursing through his veins, he tread forth, ready to meet the devil within this Hell for which he’d come. Ready to annihilate the horror and take its place as a defining force of chaos within the darkness. He didn’t even bother to wipe the blood from his face.

The Sensation intensified beyond what he’d ever felt as he emerged from the fire escape. The intensity transformed from radiance into sheer malicious density anchored in the center of the large basement, the exact position hidden among the columns before him. Expanding his mind away from the overwhelming experience, Priest processed the aspects of his tormentor’s makeshift lair. Unlike the previous floor, the murky darkness around him smelled entirely of blood. Fresh blood. Priest could intuitively tell a subtle distinction that indicated the blood was neither human nor animal, another manifestation of his altered condition. At least one of the ravenous monsters had been slaughtered down here in the darkness, he knew. And not long ago.

Fear detonated in the recesses of his psyche and threatened to dilute the vicious calm he’d discovered within. Priest’s new existence indoctrinated him with the understanding that although he and the other Stalkers were no longer entirely human, enough of their humanity remained for the physical changes manifested by Fear to be like a halogen light in a moonless desert, summoning the ravenous denizens of the horde. Especially the diabolical Xaphan.

“The only way out is through,” he repeated inwardly, a mantra to banish the reaction.

A wraith in the shadows, Priest advanced towards the epicenter of that inhuman presence in his mind.

"The only way out is through"

Be safe Priest Be safe... 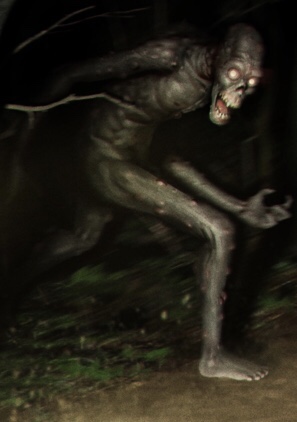