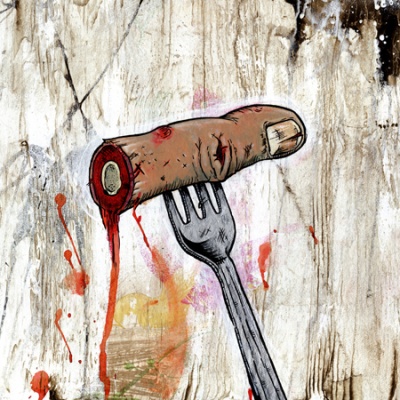 The summer rain washed the dust covered streets, cleaning away the stains of blood, and the rotten clumps of decayed flesh. As the lightening danced over the sky the rain fell harder, main street was getting its old self back slowly. Belial couldn't remember the last time it had rained this hard, she sat there up in her perch watching, as the cursed made their way on the ground baffled by storm. "Apparently you die, and become stupid" she tugged her hoodie over her head tighter, leaned back against the railing and hummed along with her music. Her mind wondered back to both the days of the cursed, back when she was much younger, back when she was happy to be alive. The further she drifted back the clearer she could see how life used to be.

Seeing her mother and father waving goodbye to her as she started off to college was as far back as she would go, it was with in days of that, that the world turned in on itself. Getting up and removing the soaked hoodie Belial stood one hand on the railing the other sliding the iPod into her pocket. Goosesbumps covered her exposed skin as the storm changed the wind and head back towards the center of town. Her hair flicked and snapped with the change, cupping her hands over her mouth she yelled out.

No one answered her they never did, she wasnt alone in the town there were others who had survived but they refused to believe her that the cursed would not attack them accept at night or if their stash of rotted meat had gone low. She just wanted someone to talk to, she needed to hear another voice besides her own. The silence of being an outcast was growing on her fast. Releasing a heavy sigh as plopped back down pulled her legs up to her chest and burried her face into her knees.

Comment by Komrad Mercenary☭ on June 23, 2010 at 3:33pm
The Book of the Dead is filled with spells and stories for how to enjoy the afterlife. Egyptian people believed in an afterlife, and this book was the Wickedest of all.