There was a big battle coming up a very big one L.A. big we were facing 17 million of those things… Continue

The air blew on my face was frigid and cold, it cut into my face like a knife and stayed there for the day. My ears were freezing I rubbed snow on them they were fine for a while after that. My hands were moist from the warmth of the gloves I took them out and cooled them off in the icy northern wind. I slipped them back in the mittens and started walking on the snow. Luckily I had a great pair of winter boots (L.L. Bean 16 inchers of course) and a great pair of Tubbs Snowshoes

Looking VERY 4ward to the special screening of our upcoming zombie / horror film , " One Last Sunset " this Saturday. This has been one of the largest productions that we've ever put together and with all of the invaluble press coverage and interest ( domestically and internationally ) , we look to the future with bright eyes and our weapons locked 'n loaded. The sun begins to set on August 28th ! Thanks to everyone for your unwielding support. Keep on peepin on…

Zombies aren't going to be all we have to worry about if Z-day happens. Government quarantines can have us in the shitter for sure. Living relatives of the living dead will be protecting them. We'll be getting rid of our families, our best friends, maybe everyone we know . We need to be ready for everything. Everyone has to stick together and make it through this alive, no turning on eachother. If someone you know gets infected, you let it go and you get rid of the problem; If you get…

Visit Daph's Dark Corner and become a follower of my blog. When followers reach 50 I am having a giveaway.

My legs ached, my knees weak, my heart pounding, lungs, heaving, my head near explosion, and I had three stitch cramps along my core.

Yep, I was a runner I turned my head behind me just to see the horde little more than 150 yards behind me. I whirled around and unslung my Marlin 22. LR with 24 x 50 scope and sighted my first one it was a newer one a guy tall with faded red hair his pale grey eyes looked straight at me I took a deep breath, held it for, squeezed the head had a nice… Continue


CAN YOU SCREAM LOUDER THAN A CHAINSAW?

Join us to create a new dimension of mind-bending terror!…

Own a slice of history ! Be one of the selected few to own an autographed theatre-sized poster of " One Last Sunset ".

Now I'm actually a gun runner I fill the bed of my ford raptor and bring them into besieged cities and areas granted I do charge whatever they have food, booze, drugs, medical supplies, water, filters, gold, silver, diamonds, and gas, I'll take anything of value because I gotta make something off this and keep… Continue

I had a little boombox on my bike and was blasting The Trooper as I roared down I 94 on my XR1 200X screaming the lyrics "YOU TAKE MY LIFE BUT I'LL TAKE YOURS TOO YOU FIRE MUSKET BUT I'LL RUN YOU THROUGH SO WHEN YOUR WAITING FOR THE NEXT ATTACK YOU BETTER STAND THERE'S NO TURNING BACK!!!" I was heading toward sturgis when the shit didn't just hit the fan it fucking demolished it 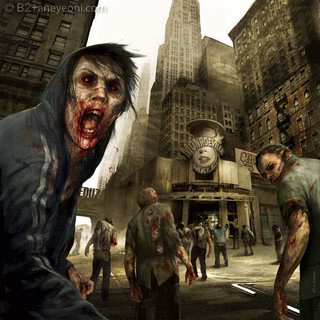 I stand off in the disstance, looking to a city once filled with life,
but now, full of the living dead. I stair off as an explosion, followed by the screams and gunshots
of helpless civilions.

What am I suppoused to do, die like the rest of them?
I turn to grab my bonoculars to get a better look. I scan around the over-run city, I see a…