Dawn of the Smurfs

The Smurfs hits theaters this weekend. I could write an entire post decrying the bastardization of a cherished cartoon... but I'll restrain myself. 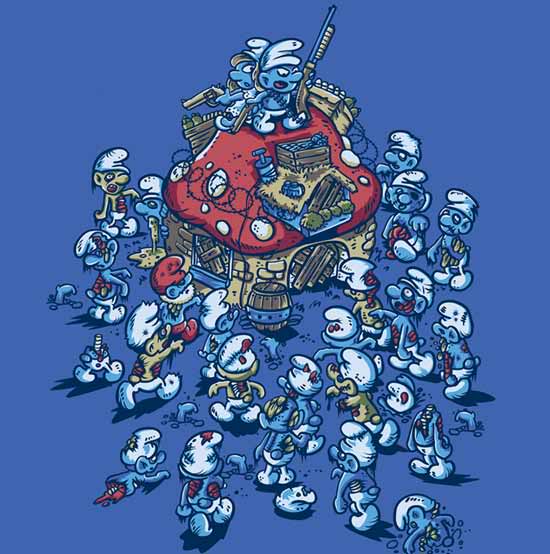 Instead, I'll pass along a little zombie tidbit that you may or may not know. It's not exactly breaking news --- but if you haven't seen it before, it's interesting:

After The Dealer's Club won the top prize (called The Golden Quickie Award) at the Quickflck London screening on the 8th of June, in a fit of hubris I decided to have another go, with the result that I've spent the last six weeks or so immersed in the making of a new video, this time on the theme of: "Mirror."

I finally finished the new video last Friday, just in time for it to be shown at the Quickflick London screening on Tuesday the 26th of July, where.... guess…

Before I post this I just wanna say that this is mine and i've been thinking about making them into song lyrics..So please tell me what you guys think. Thank you! :D

Take a look.. at everything around you.

Do you really want to leave?

Can you really leave this world?

You say that no one cares..

But Look at Me look at the friends you'd leave

Get up and show me what you can…

well its time for a brainfart blog entry just to clear my head a bit...

tingle tangle in my head,tangle tangle out instead, tingle tingle goes my phone,a little jingle goes the tone and in my head confusion reigns,find myself in limbo again-some random rhyming poetry from me

ok so when z-day comes would you become celibate? or take a risk for pleasure?

i mean,one way or another someone would be having sex to continue out…

If Anime Was Real...

A lot of you probably don't know what it is or aren't big fans of it, but pretty much its just animated videos. Drawings and what not. Most people think its just Japanese animation, but technically its any and all animation. Enough, though. Check out this funny ass…

I've recently come across a cat that I've made my very own.

Her name is Chloe.

If anyone wonder's why its a cat, it was a last minute decision for my friend and he had to give it to someone, so he figured me. Now instead of going with my plans of getting a dog or two I've got a feline that scratches me relentlessly night and day and meows enough that I haven't been getting a lick of sleep. I'll post a picture of the pain in the up later so everyone can see… *I take no credit for this story, I stumbled upon it sometime ago and it was not listed with an author, but it's too brilliant not to share! Thank-you Anonymous writer!!*

(CARRIE, MIRANDA, CHARLOTTE, and SAMANTHA sit around a brunch table in a smoldering crater after the Apocalypse. They sip mimosa glasses filled with scarab beetles…

The rising sun gleams against the crimson sky.

The sun is nested between the snow covered mountains.

The crisp air blows across my face.

It is a perfect day for the Climb.

The beginning as most would say,

Is the first step to success.

For my purpose my beginning must be absolutely perfect.

If I fail at the beginning I will never make my goal.

And that is not an option.

I must complete the Climb.

hi all,i'm back again,been a busy girl making my new flat into a home.

bella is her happy self but she's so vocal now that its nuts!

been workin on my book,been baking,

been having zombie dreams but i dont focus on that,not always...

did ya'll hear bout the "corpse" waking up in south africa? weird right?lol

Yep! I thought it was a good idea to invest to for any of you who are a part of Twitter! Never use yours? Don't have one? Doesn't hurt to simply follow for when you want to check up on whats going on here in Stalker HQ.

You can find it by clicking here.

We will also be coming out with a facebook as soon as possible, however the system will not recognize Stalkers HQ has a correct…

Ugh, it took me a while, but I made one for the site that I generally hope will end up successful. It feels like a good idea, and I get the feeling it will get followers like Nexus and Komrads, which means we would have one more fighting force against both the undead and all rogues out there that stand in our way to making a better tomorrow. The link is below for anyone curious or willing to join to help out the cause against the infected.

May be quiet this week on this end...

We're having a shitty week. We lost a pet today. I've been sick all week, have a toothache and for some reason swelling in my feet that won't go away! So I may not be posting many welcomes and comments, but I'm still  here, lovin' my Wicked friends. I hope you all have a lovely weekend!

ZOMBIEEE WALK OF THE SUMMER!!

My cat. My mouse.

I can feel the tension. The contracting muscles that grip slowly against my throat. My jaw clenches tightly and I stare ahead, the scope of my rifle covered by foliage picked from some bushes a couple miles back. The target I'd been tracking for months finally chooses a spot to rest. Quietly my breath begins to slow down and I rest firmly on my stomach in a prone position. Both eyes are open, one closing slowly and I nod in silence to myself. I've been through the scenario a million times…

Two years ago if you heard the name scotty you'd think of that one guy.

The once in a while person you would see that everyone seems to know.

Now if you hear my name you would recognize it as your protector.

The one who kills for a living, who never sleeps unless I have a gun.

and everyday im the one walking past the engulfing flames getting to you.

My hair shagged and dried from…

When Life Doesn't Give You Lemons, Make OJ Instead

We all have a story, some of them worse than others. Maybe you've lost the love of your life, a best friend, or a family member. Maybe you were sexually, physically, or emotionally abused. Maybe life just sucks ass and you're one of those people who end up on Jerry Springer, confronting your inner demons in your fifteen minutes of fame that you didn't want. Whatever. Who am I to judge on all that? I mean, my life sure as hell ain't perfect. And some times I chick out and cry, or…