We made front page of the Weekend section of the regional paper!

Well excitement seems to be brewing in our area about "Dead on Delmarva."

A couple of weeks ago the entertainment editor for the Easton Star Democrat came to my fiance's and my home for an interview, which has been one of many. I didn't know we were going to be the front page of the weekend section!

Some of the interviews were never even published, so this was a nice…

It's a day where gays, lesbians, trangenders, and even straights are heard. Or, rather, silent. For those who support, we are silent; we represent those who cannot stand up and speak, and those who have suffered hate crimes and abuse. For the braver ones, painted stitches across our mouths symbolize our silence. I am one of those people. I am silent, but not invisible. You see the paint on my face and know who I am and what I stand for. I am not beautiful or gorgeous, but on this day, I turn…

Well I went to the ER this evening and turns out I have bronchitis and not phnemonia..thank god :) bad thing is i dont have health insurance at the moment and i had to get chest xrays and stuff. Good thing:got some prescriptions...cough syrup with hydrocodine in it :D and a thing called Z-Pack. On top of it all I got me a hospital bracelet! haha ill be wearing this for about a week haha love these things.... :)

OVERALL IT WENT WELL IM NOT GOING TO DIE!

Something to tickle your rib-cage, by Keith Carpenter cheer on the bloodshed,

he'll save you here.

You leave behind this… 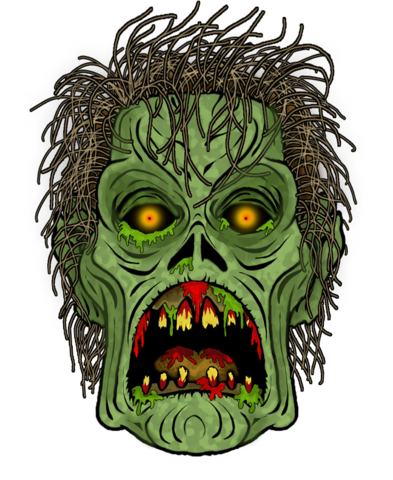 Friends, I've lived in Asia for a decade now and I have to say there is some creepy shit that goes on here. I was just introduced to a story about some cloistered villages in Indonesia that practice some wicked shit that definitely falls under the cateGORY of "All Things Zombie" check it  out. … Continue

http://rottenzombies.podomatic.com/ hey zombie loving friends... check out my podcast and become a follower so you'll know when each new episode comes out. It's more fun than a barrel of zombies.

I get on the Top 5 members list here but im sure ill lose it soon :/ haha

Greetings,
I would like invite you to the annual Halloween, Horror & Haunted House Convention.  In less than 30 days our… Continue

The Third Stage of Hell--Parties

I don't drink booze or smoke pot--it makes me feel paranoid and out of control, plus drugs are stupid. So when everyone's grinding up against one another and drunk off their asses, I'm the chick standing in the corner wondering what the hell I was doing there, trying to have fun but really just bored and tired. My cousin once took me to a party, but become pretty pissed when I told her friend to F-off when he tried to cup a feel. I don't think she got the fact that I was…

The Second Stage of Hell--Victoria's Secret

Okay, I suppose the place is great if you're a size -3 but for those of us who are skinny challenged? Not so much. Not for me, anyways. I don't like seeing the skinny itty-bitty mannequins in the windows, wearing nothing but a blank expression and some lace thingies that can't even be described as underwear. And for us poor people who can't afford it, it sucks pretty bad. Seven bucks for a pair of underwear? I get a packet of ten for the same amount. And, okay, they're ugly and bulky and only… Continue

The Seven Stages of Hell (Of Mine, Anyway)

The First Stage: High school. I don't remember there ever being more or even as much drama in my life. I'd like to walk down the hall without seeing a rival or one of my more annoying friends, but of course that's impossible. And the cliques, or whatever they're called. There's the Mexicans--and some of the Mexican'ts; the stoners--who always smell like ass, potato chips, and dead skunk; the goths/emos--sometimes the guys look like the girls, the girls look like the guys, and the…

with Accept, Sabaton, and Cypher Seer

Rotten Zombies with Keith Carpenter and The Ren

Hey Peeps, if you can't get a chance to catch my podcast on PTN (www.peoplestvnetwork.com) at 7am Pacific time, you can catch it on my website as I will be uploading a new episode every week on Wednesday. If you wanna hear episode one tune into www.keithcarpenter.biz. pls hit me with a feeding frenzy of feedback. I love it.

Rotten Zombies With Keith Carpenter and The Ren

Hey Wicked zombie fans.... tune into PTN http://peoplestvnetwork.webstarts.com 7am US west coast time. Give me your comments and feedback or hey suggest a great zombie topic to talk about at rottenzombiesmail@gmail.com

Today is my Metal Birthday

Hey my metal maniacs today is my metal birthday and i want to thank you everyone on wickedzombie for your awesome support.I love you all to death and thrash till death.…

Johnny B. Goode was playing from someone's car.  I walked up to my 34 Dussenberg Graber and leaned up against it.  A buddy of mine came up "Say Tony you hear the word?"  I smirked "What's that Fred?"  Fred shared the smirk "There's a guy lookin for you...he's outta the wastelands he's looking to win that bounty on your head for whoever kills you."  I answered "What's he driving?"  Fred's smirked fadded "A 42 Deuce Coupe"  I smirked and caressed one of my Maxims and said "I ain't dead yet be…

Please check out "Dead on Delmarva" on imdb.

Rotten Zombies with Keith Carpenter and The Ren

Hey I'm starting a podcast on PTN www.peoplestvnetwork.com on Wednesday April 13th at 7am west coast time USA. tune in and enjoy and in the meantime feed me some good zombie tid-bits, questions, comments, topics, etc at Rottenzombiesmail@gmail.com Hope you can tune in and come chat with me on my website www.keithcarpenter.biz.… Continue