Zombie Novella - Forget the Alamo - Free on Amazon thru April 29

I've just released my zombie novella, Forget the Alamo, on Amazon.  It's available for free from April 27-April 29. 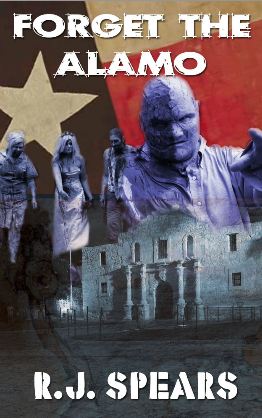 When Grant was forced to land in San Antonio with his protectee, Sam Jenkins, he didn’t expect to be there for more than a day or two.  That was until a strange viral outbreak started bringing the dead back to life and those reanimated dead started attacking the living.

After a few harrowing days, Grant and a handful of other survivors find themselves trapped inside the Alamo, surrounded by a horde of the undead with their options narrowing.  If the zombies don’t get them, starvation, or a military strike will.

With their backs against the wall, they must learn to use their ingenuity to find a way to escape and then to survive.

R.J. Spears is an award winning author of horror, crime, and mystery fiction.  His horror stories have appeared on websites such as The Horror Zine, Tales of the Zombie Wars, and Flashes in the Dark.  His story, “Boiler Room Girl” is slated to appear in the Big Pulp anthology, The Kennedy Curse, late in 2013.

I just ordered the kindle version and I shared it on facebook. I will post a review as soon as I finished the Novella!

Sorry for the slow reply.  Thanks for downloading it.  I hope you enjoy it.  The review would be great.