The Forest of Hands and Teeth by Carrie Ryan

The Forest of Hands and Teeth is a YA novel set in the future many years after a zombie outbreak.  Society has broken down, but small enclaves have survived.  They live in a precarious balance of danger each day, but have a system that allows to them live a day at a time. 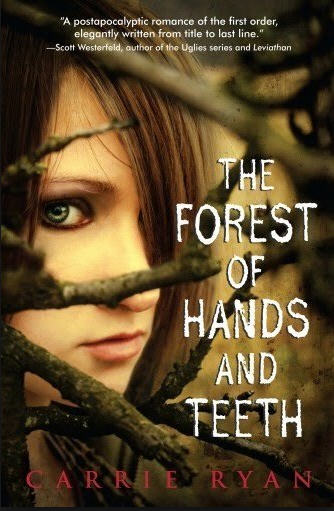 The protagonist in the novel is a teenage girl named Mary.  She has basically only known a world inside "the fences" and the "Unconsecrated" (zombies) outside, but she yearns for knowing a world larger than her own.

The world Ryan builds is fascinating and mysterious --at points, frustratingly so.  There are many, many questions, but sometimes far too little answers.

Mary is an intriguing hero, but sometimes the novel devolves into teen angst about romance and relationships.  While it is probably necessary to draw in the teen crowd, it is the least interesting thing about the book.  This is not to say that there are a lot of moon-eyed looks or kissing, but she does "yearn" an awful lot.  That beings said, it is really only a small part of the book.

And talking about it being a Teen/YA novel, there's nothing overtly juvenile about the book (with exception of the romance intrusions). This is a fascinating book and one that will make you want to keep reading.  It's world is deep and wide and I wanted to know more about.

Permalink Reply by Komrad Zombie Slayer☭ on September 5, 2015 at 5:32pm

I'm not going to lie, at first I thought I wouldn't like this book. But once I got further along, i found that I completely enjoyed this book. Several times I found myself laughing along with the characters, getting angry with them, and crying with them. Some scenes still have me feeling baffled. Over all it was a very emotional book, and I highly recommend it.