Welcome everybody to the first edition of Celebrity Zombie DeathMatch!! It's like the "Hunger Games" meets "Munch Madness"!!!

Tonight we have 16 contestants from some of your favorite Zombie movies and shows, along with a couple of "special guest stars".

So, without further adieu, I give you the First Round Match-Ups:

this classic needs no introduction.

Return of the Living Dead Part 2

here is some wholesome zombie fun and laughs for the whole family. :)

here is a classic. enjoy.

At last! THE BIG NEWS!

Some of you may know I'm an aspiring author. The link you see above is to my Novel, Enclave A Novel of the Zombie Apocalypse, available at Amazon.com. If you already have it - PLEASE upload the FREE Updated version!

If you don't have it, for the next 3 days - it's FREE! If you read it, please post a review! Thanks.

What Is The Meaning Of Zombie Movies

The Meaning of Zombie…

So I'm re-reading my first published Novel, Enclave and what do I notice? A chronological error! When I did the final rewrite, I moved some chapters around and didn't fix the dang dates. Well that's fixed now and as soon as I hear from Amazon, I'll have some IMPORTANT news for anyone who bought it!

Fast zombies or slow zombies?  I’m sure this question has been raised time and again fueled by alcohol and rabid horror fans.  Any true zombie fan has a strong opinion one way or the other and, as one who has spent more time than I would like to admit debating it, I will add my voice to the discourse of the horde.  This is, by no means, an attempt to have the final word on the subject, far from it.  My aim is merely to state my case and, possibly, win a few brains over to my…

ZOMBIES (Morgue of the Dead)

ZOMBIES (Morgue of the Dead) is out now in digital form from NAKED SNAKE PRESS, and is available from Amazon/B&N... 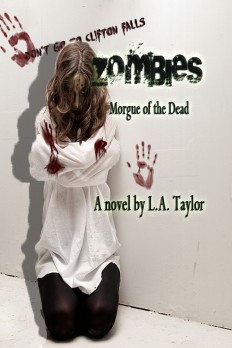 I can do signed copies, but as I live in the UK, it will cost…

The only good zombie is a dead zombie. Burn em, shoot em, decapitate em... as long as they're dead, they're harmless.

Assassin's Creed III is an upcoming game being developed and published by Ubisoft set for release on October 30, 2012. It will be the fifth major installment in the Assassin's Creed series and the third numbered title in the series. It will be set during the …

This may be a little boring for a lot of people, but I want you to read the opening sequence of George Romero's script for Dawn of the Dead. For a couple of reasons. One is that Romero breaks all the rules of script writing in that he writes the scenes out the way he wants to shoot them. If you gave that type of script to a primadonna director they'd fly into a rage. …