Zombie Hunters: City of the Dead

This group does not have any discussions yet.

You need to be a member of Zombie Hunters: City of the Dead to add comments!

Comment by Patrick Devaney on March 23, 2011 at 1:16am
Hey Everyone!    If you're in the Indiana area this weekend, stop by our booth and say hello!  To show out support for the board, we'll have special deals for anyone mentioning WICKED ZOMBIES!    Hope all of you are well! 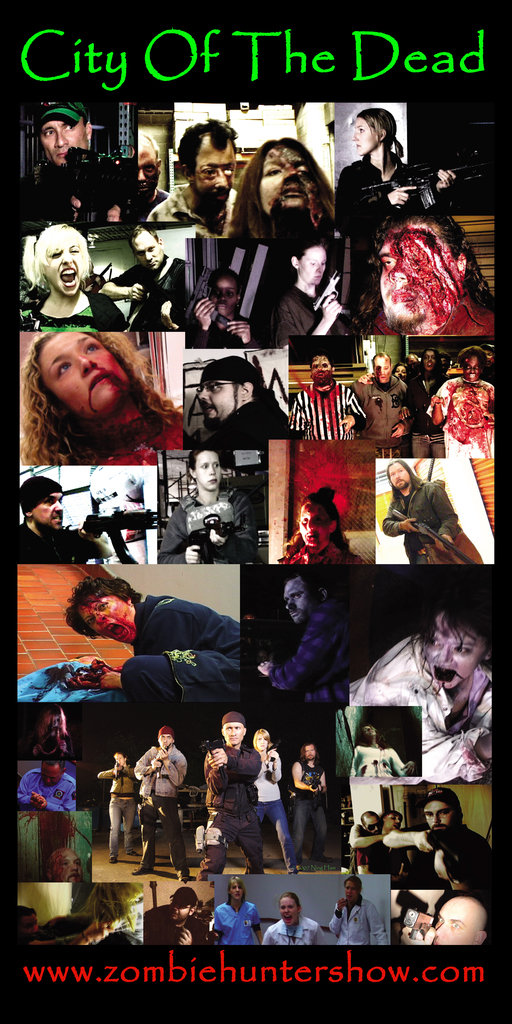 "ZOMBIE HUNTERS: City of the Dead"   2 shows in March!   The entire FIRST SEASON now available on DVD!!   Come by the table and say hello!

And stop by www.moncherchannel.tv every Sunday night from 8:30 - 9:30 to see two back-to-back episodes of the show! 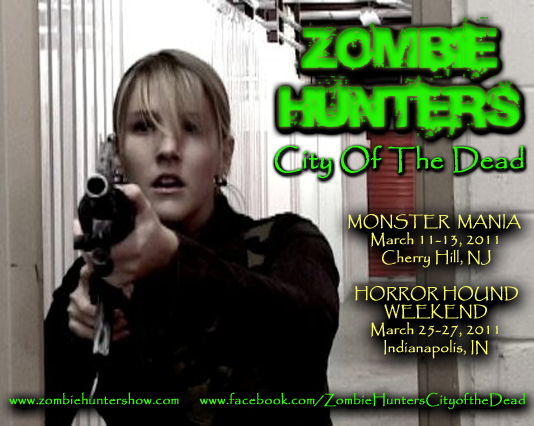 Comment by Komrad Zombie Slayer☭ on June 3, 2010 at 7:19am
Thanks for making a zombie series and posting it on WZ!

Comment by Komrad Dead Warrior☭ on April 30, 2010 at 10:08pm
The series looks interesting. Comment by Patrick Devaney on April 11, 2010 at 7:00pm
Hello from the boarded-up, well-stocked basement!

First and foremost, a big welcome to all our new people who've signed up at the site and at the Monster Mania convention. Thanks for stopping by and allowing us to entertain you! Monster Mania in March was one of the best shows we've ever done, and it was mostly due to the great people we got to meet and who helped support our efforts. To ALL of you, thanks again and we hope to see you soon...


ZH:COTD AT THE CHILLER THEATRE CONVENTION

...and that might be VERY soon, as the cast of "Zombie Hunters: City Of The Dead" is returning to the Chiller Theatre Convention, April 16-18 in NJ, in their first Chiller appearance in a year!! Come down and pick up Episodes 5 & 6, autographs, buttons, pic opportunities, and more! The guest list is pretty well stacked for this show, where Alice Cooper himself will also be appearing and signing autographs (yes, THE Alice Cooper!)

Also, as a special for our friends, come to the convention wearing your Zombie Hunters t-shirts or buttons and get the latest episode on DVD FREE!

For more information, check out the main site at http://www.chillertheatre.com

If you're not checking this out, you're really missing something. Our friends at Cult Radio A Go Go have started their own retro-horror online TV station: Cult TV A Go Go! In addition to old horror films, they stream Zombie Hunters in regular rotation, and all of this 24 hours a day. Just check it out, seriously. It's very cool.

You might have heard about how we constantly work on the show, and that's because we do. Whenever we can. And that's because we are committed to bringing all of you the latest episodes in the unfolding ZH drama. Episode 7 is slated to be completed by July, and Episode 8 (the last of this current season) by September. Many people have asked us when the Zombie plague would grow to the point where the world could no longer deny it; trust us, it's about to go down. And the Hunters get caught up in the forefront of it.

And not everyone is gonna to get out of this one alive.

So please stay tuned and keep in touch, because this thing is about to take a radical turn, and we want you all to see it!

In non-Zombie news, Devarez Films LLC (our parent company) has secured the rights to make a film adaptation of a story from the early days of Heavy Metal magazine. While not Zombie-related, this short film shows the will of one person against a society geared to crush her innermost self. And fans of Teri Hansen ("Carrie Walker" on ZH) will be pleased to see her in the starring role! Principal photography is slated to begin in November of 2010.

And while we start shooting the second season of ZH, the summer of 2011 will also see us in pre-production of another film, this one taking certain aspects of classic horror and turning them slightly on their undead ears. We're taking back the nights, people... in a world where words are weapons and hope is almost impossible to come by. This one is scheduled to be released by mid-2012.

Did you know we have a fansite on Facebook? Well, we do! Check it out here:

This is the place for all the latest news updates on the show, where we'll be hanging out, what live shows are next, as well as regularly updated screen shots and behind-the-scenes candids of the new episodes and locations. So if you haven't already, sign up there today!


Hope to see you all at Chiller!


DVD of episodes 1-4 available at:

Comment by Patrick Devaney on January 21, 2010 at 8:22pm
Hey everyone! "Zombie Hunters: City of the Dead" will have a booth at both the March Monster Mania convention and the April Chiller Convention. We'll also be hanging out at Saturday Nightmares. Hope to see you all during these shows!!