Things that go "BUMP" in the night!

I believe it is time to show what we are all up against.
Sure we all know what zombie looks like, but what about the other nasties
that are out there?? Following are some examples of what is out there. 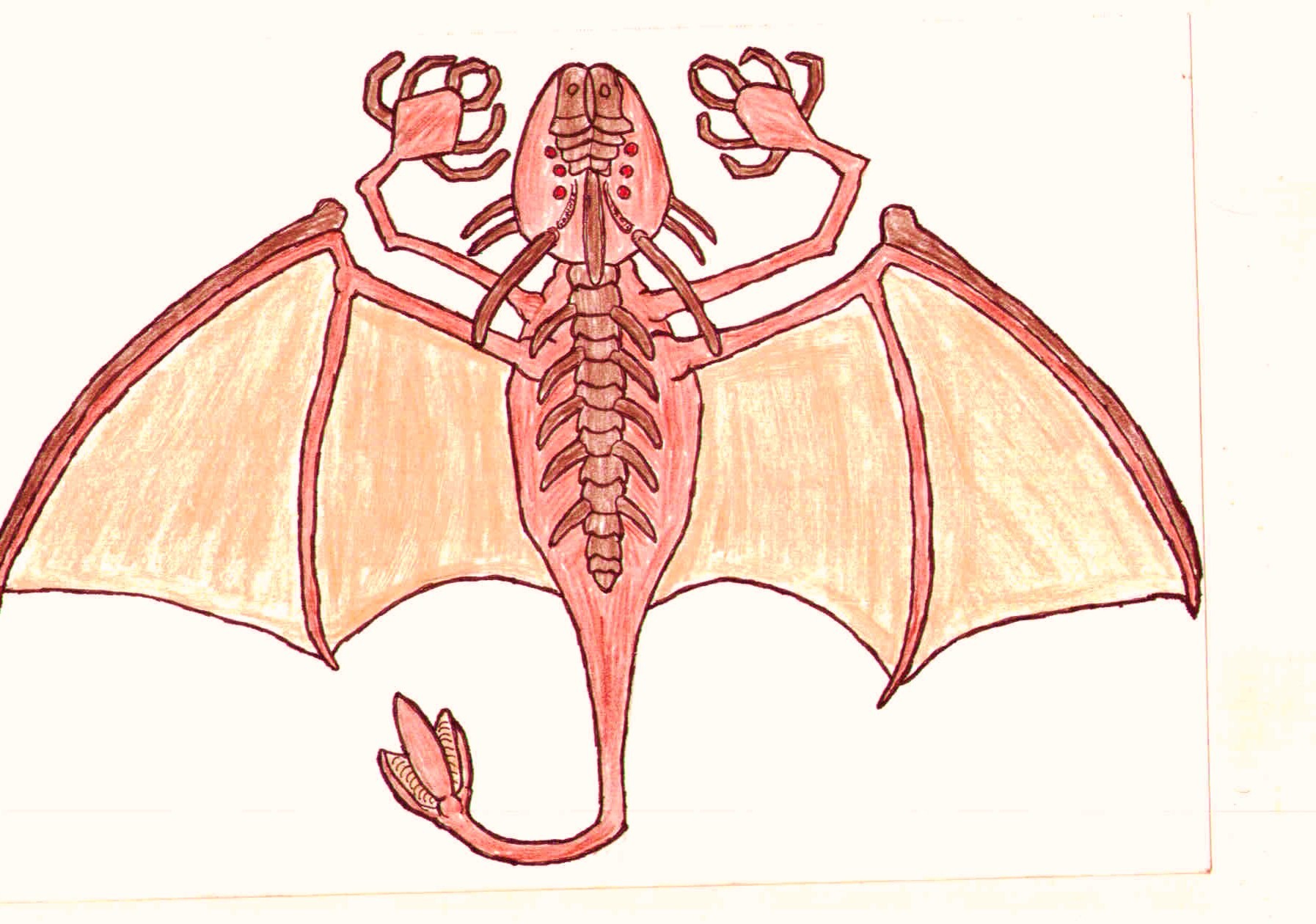 This a Hell Bat also known as "Razorwing". I first met this little bastard down in Antarctica while working at the "Deep Core" Project.
It is about 7ft long with an 8-10ft wing span. Weighs about 150lbs. 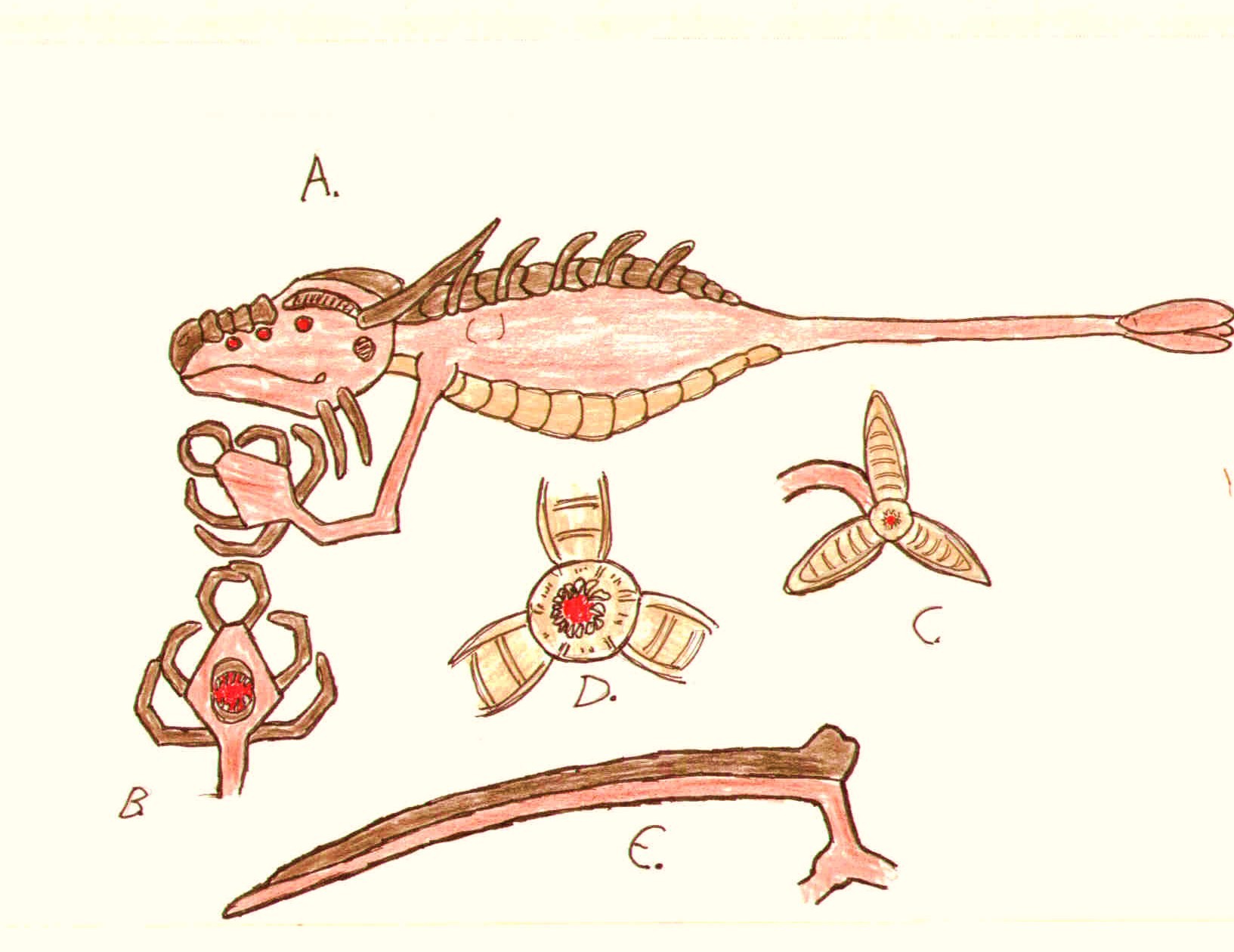 I have included a top view and side view drawings.
Figure A. is what it looks like without wings. It has a smooth, almost chitin like outer
skin. Horns on its head and cheeks with a spinal ridge on its back with spines making
it look dragon like. The red spots are its eyes!

Figure B. is the underside of its hand. It has very long fingers with a mouth lined with razor sharp teeth in its palm. The hand does look like a spider from hell.

It has a long tail that ends in three clumps. Figure C. shows that it opens up to reveal
a mouth for biting and claws for grabbing. Figure D. is more detail of the tail
Tail is very prehensile and is often used as a weapon.

Figure E. is for the bone spur on its wings leading edge. It is razor sharp and can disembowel its victims. Hence the name "Razorwing". Humans that encountered this beast fell by the score.

Don't know if it is mammal or reptile, but it very dangerous and craves human flesh.
It likes to hide in caverns, old buildings and sometime trees. It is usually nocturnal but has been sighted in daylight.

At the last sighting in Antarctica in 1988, there have been reports of razorwing activity in the bayou country of the south and the back woods of New England.
They will follow the food trail. Metropolitan areas are reporting strange bat like creatures in the night sky.

HEX, watch your back!! These things serve the forces of darkness and the old ones as well. And they do not tolerate those who will destroy their masters.
Carry a DAMN BIG GUN with you at all times.

Permalink Reply by The Dread Pirate Boodrow on June 6, 2009 at 2:50pm
The next creature is a fucking nightmare. I call it woggie as in polywog. Only nowhere nears as cute!! 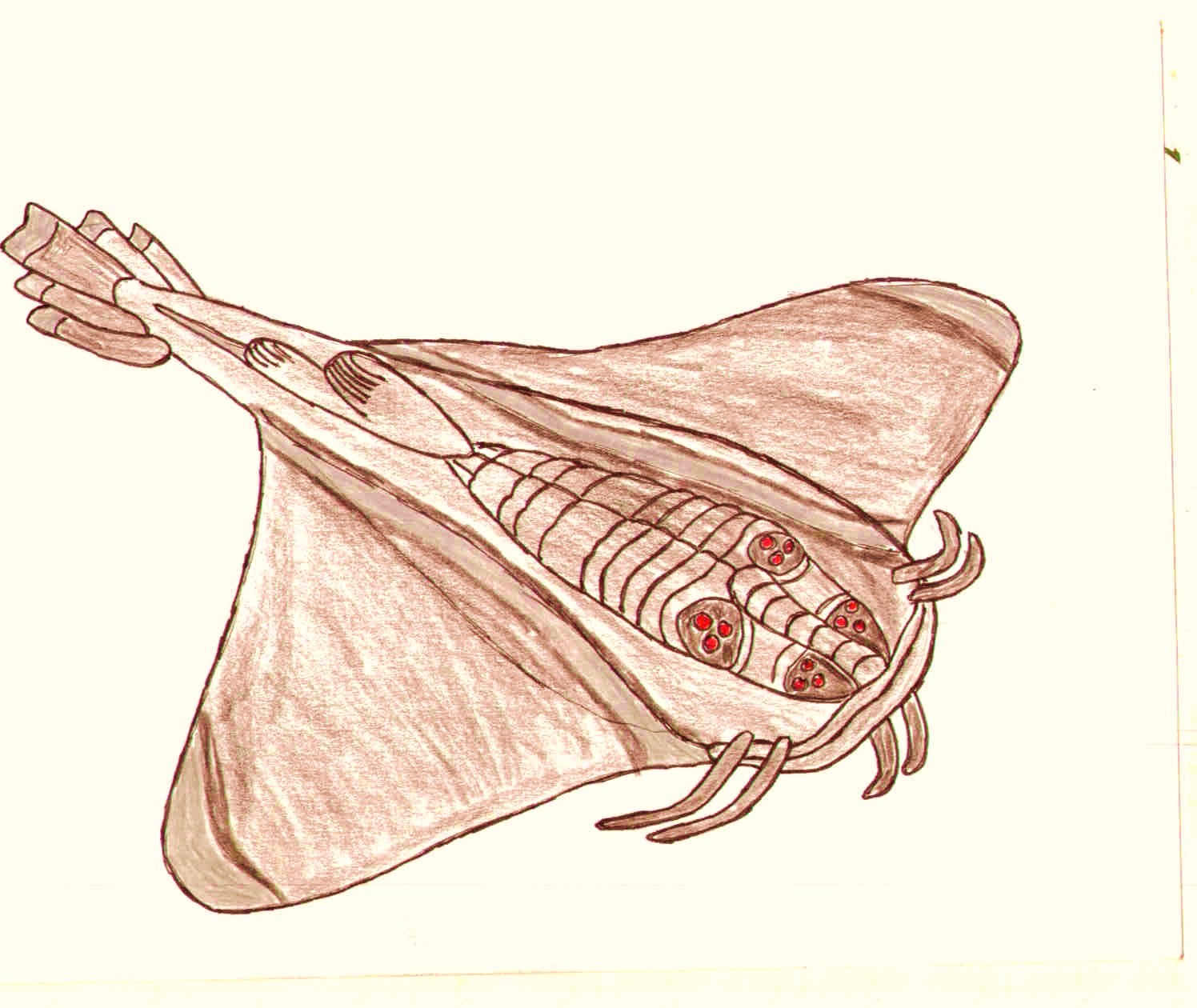 It looks like a sting ray from hell. basic color is an oily black with silver stripes on its body and silver wing tips. About 9ft long with a span of 8ft. Weighs about 250lbs. 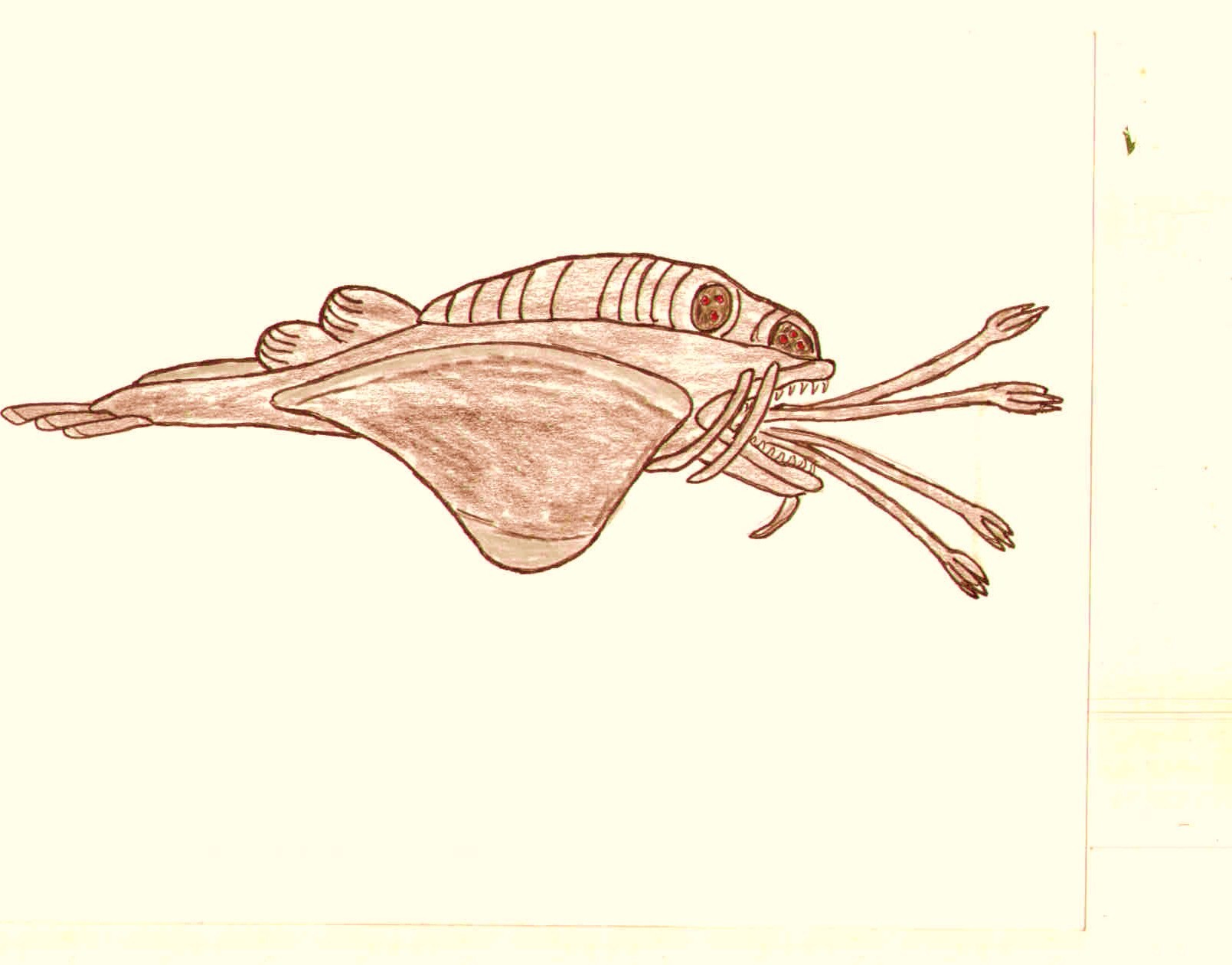 Damn thing has twelve eyes and looks like something from Alien or H.R. Geiger.
It has four tendrils that shoot out of its mouth to grab its victims. It has highly acidic digestive juices
and if it bites you, kiss you ass good bye. One bite will sever a limb, leg, arm, Head.
It can distend its lower jaw and swallow a person whole.

Lady Wolves watch out!! You girls are just a tasty treat for it!

They are mean, nasty and they along with the razorwing hunt in packs!!
They emit a spray that seems petroleum in nature and can blind you if you're not careful.
That is their weakness. You can kill them with a good flare or fire bomb.
They burn like old tires. You can also use salt. They hate the ocean. Salt burns them like slugs.
You can also pee on it,[Providing you are doing at safe distance like on a rock] and they smoke and burn. And scream too.

They swim through water and fly through the air as well. They prefer dark and damp areas and will avoid direct sunlight. It burns them as well.

Sewage is their natural habitat. They just like nasty places to hang out.They should be avoided at all costs!!

Permalink Reply by The Dread Pirate Boodrow on June 6, 2009 at 3:03pm
And how can anyone forget the "NIMON" also known as "Cruncher" 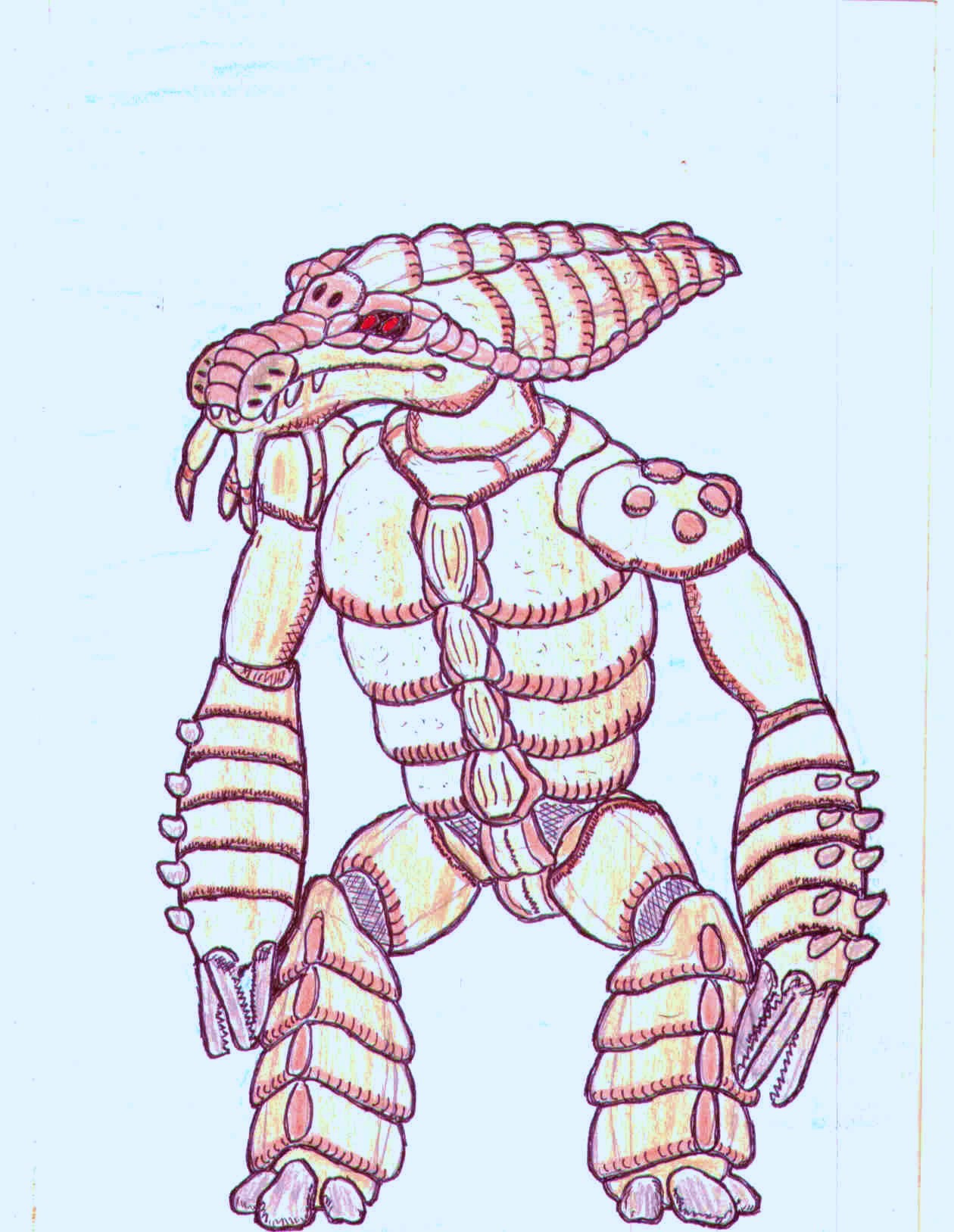 It walks with a gorilla like stance. It stands at 8-9ft high. Weighs about 750lbs!! It has a hard outer skin that like a crocodiles. Big,mean, and Nasty!! It has spikes on its fore arms to crush and/or impale its prey. Its skull is very boney and is hard to damage. It jaws can open wide enough to bite your ass in half.
You will need armor piercing rounds to take this bastard out!!

It like to haunt rock quarries, old buildings, subways and any place that is warm like power plants.
In Antarctica it haunted areas that had high volcanic activity..It ate a lot of people at "Deep Core".
Including some friends.

They serve the Old Ones. Break out the heavy metal when taking this bastard on.

Permalink Reply by veiropia on June 8, 2009 at 12:40am
your pets? well well I do like it when there is someone who like s to explor in the unknowen stage of the piteful world.

mabye we can sure Our wonders and c hwo has been train the best?

Permalink Reply by The Dread Pirate Boodrow on June 9, 2009 at 5:33pm
I thought that your "Pets" all worked at the "Bunny Ranch" In Nevada near Reno!!

Permalink Reply by The Dread Pirate Boodrow on June 9, 2009 at 5:43pm
The tree that you are referring to is from South America. When someone has committed a crime
they take the person to a hollow tree and they impale him with a spear or knife. Then they burn the tree with the criminal inside it to purify the earth.

If the person was truly evil, he be reborn as the tree as will forced to walk the earth for all eternity. While doing this, he will keep on killing to satisfy his bloodlust.The only way to stop him is to drive the knife or spear deeper into his evil heart and then you must set the tree on fire and burn it until only ashes are left.

Tricking his ass into quicksand will only make him sleep.
You must destroy this bastard with fire.

The first time this story came to light was in the old horror flick " From Hell It Came".
They didn't get all the facts straight because they want to make a movie and not a documentary. That's Hollywood for you.

Permalink Reply by The Dread Pirate Boodrow on June 9, 2009 at 5:45pm
So very true!! It is nice to know that someone else also knows about these things!!

Permalink Reply by Komrad Mercenary☭ on January 12, 2011 at 3:09pm
Things That go BUMP in the night! Permalink Reply by Komrad Venessa Wicked☭ on February 10, 2011 at 8:46pm
This kreature is a WICKED and has kaused many nightmares in its Path of WICKED Destruction. Permalink Reply by The Dread Pirate Boodrow on February 13, 2011 at 4:05pm
Mutant Spiders!! All over New England [Except for New Jersey] [Lady Wolves ran their asses the hell out!]

Permalink Reply by Komrad Venessa Wicked☭ on February 13, 2011 at 4:28pm
Well we need to work on NYC because they are over over the place.

Permalink Reply by The Dread Pirate Boodrow on February 13, 2011 at 4:40pm
I know from experience that they are big suckers!! Flame throwers are good but weapons with armor piercing rounds are the best way of destroying them!! I believe that a .50 cal has them. I think that there is a 20mm anti tank rifle to be had as well but they are heavy. Can take out light armor with them. Great for subway tunnels and big spiders. Make little hole going in and a damn big one going out! Armor piercing; HE and incendiary rounds work best!