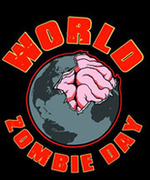 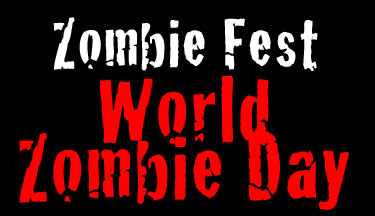 In 1968 a film was released in Pittsburgh that changed the face of horror history forever. It changed zombies from mindless undead slaves into flesh-hungry beasts that thirst for blood! Film history would never be the same.

Now, 40 years later, some new blood is picking up the rotten pieces and upping the ante.

Pittsburgh's greatest horror hit "The It's Alive Show" is proud to present...

Every major and minor city of the world that has ever hosted a zombie walk can band together and give one solid groan heard WORLDWIDE for the zombie cause!

RISE UP UNDEAD BROTHERS AND SISTERS!!! NOW IS OUR TIME TO GROAN AND SHAMBLE FOR WORLD HUNGER!!

World Zombie Day™ will be a day when all fans of zombie culture can join together. There will be an international charity event done throughout the cities involved to help alleviate world hunger, and this will be a first.

The It’s Alive Show”, World Record Holders for the largest zombie walk ever, will spearhead this event from the very birthplace of zombie culture, Pittsburgh, Pennsylvania, USA.

The participating living dead are encouraged to bring a non-perishable food item to each zombie walk starting point. A mass effort will be taken on worldwide to prove that charity, goodwill, and zombie love can flourish in every nation regardless of race, ethnicity, sex, or religion, and that no matter where or how we die…

WE WILL COME BACK!!!

Comment by Scatoma on October 7, 2009 at 5:20pm
I am excited. I may kill a family and feed them to another family in celebration. That is real zombie charity right there.