Hey again. I wanted to try and keep this project in everyone's mind. There were some great submissions at first, but nothing in about a week now. It would be really nice to at least get an expansion put together, if not an entire deck.  So, here's the info again, please try to get the word out to anyone you guys might think would be interested. Thanks!!!

Hey, Wicked Ones. I was looking over all the great pics that get put on here and I had an idea. As some of you may know, I created a card game called Zombie Apocalypse (you can check out some photos for it on my main page). Anyway, It basically comes as a playing card size deck as well as 15 expansions of 14 cards each (so there's nearly 300 different zombie themed cards). For me, the biggest fun is coming up with the different cards.

So, here's my idea. I thought it would be cool to do a special "Wicked Zombies" expansion for Zombie Apocalypse. Anybody who has pictures they've taken of themselves and/or friends as zombies, zombie hunters, zombie art, basically the kind of groovy stuff that gets posted on here daily, can send them to me to be used in the expansion.

Anybody who sends me a photo(s) that end up being used would get credited on the card(s), as well as have final say on if the image can be used once the expansion is completed. Their images would never be used by me for anything else and they can resend their permission to use the photo's any time they wish.

The expansion would be compatible with the Zombie Apocalypse basic deck, as well as all of the expansions. But, there would be a couple of differences in how it is made available. The first is that it would be sold at cost to anybody that wants it. This means that I would make no profit off of the expansion. Again, the biggest fun for me is making the cards.

The other difference is that it wouldn't be officially published on the site that prints and ships Zombie Apocalypse for me. The only way to ever get it will be through a link I will provide on Wicked Zombies once it is ready to be sold. That site, TheGameCrafter.com, will only charge for the cost of printing (something like $4 per expansion). So, Nobody will be making money off of this expansion. This is just something I like to do and that I thought might make a good way to say thanks to all the cool people I've met on Wicked Zombies.

If I would happen to get enough submissions, I will even make a "Wicked Zombies" version of the basic deck (again sold at cost).

So, If anybody has any more questions about how it would work or about the Zombie Apocalypse game in general, please shoot me an email. Otherwise, start getting those photo's to me! Be as bloody/creepy/sexy/badass as possible. So, basically, just be yourselves!

EDIT: I WANTED TO ADD THIS TO THE ORIGINAL POST SO IT WAS EASY FOR PEOPLE TO FIND:

Hey, Guys. I'm glad people are getting into this! To answer some questions I've been asked:

As far as the photos, anything you have that you think might work for a zombie/horror themed game is great. Landscape orientation is best, but don't let it keep you from submitting a portrait oriented one. The higher the resolution, the better. Also, be sure to give me the name of the person to credit for the photograph.

To give everyone an idea of what I need, I'm listing here the layout for Zombie Apocalypse. Think of the basic deck like a deck of cards. There are 4 "suits" of 14 cards each. An expansion for ZA is basically just an extra suit of 14 cards numbered 1-14. The layout for each suit is always the same.

Card #1: This is the "Zombie Apocalypse" card. I usually prefer to use artwork for this card, or a photo that does a good job of summing up a Zombie Apocalypse in a single image.

Card#2: This is the Refuge card. This is usually a picture of a building or vehicle, anything that the humans might be able to use to keep the zombies at bay.

Card#3: This is the Weapon card. This is usually a picture of, obviously, guns/knives/chainsaws- anything you could use to help take out a zombie. A good pic of someone using a particular weapon is also good.

Card#4: This is the Reinforcements card. This is a picture of three or more humans in their best "Zombie Apocalypse" poses.

Card #5: This is the Zombie Horde card. This is a picture of three or more zombies.

Cards#6-9: These are all single Zombie cards.

Card#10: This is usually a card with two zombies on it.

Cards#11-13: These are the Humans cards. Usually with just one human per card, but sometimes with two.

Card#14: This is usually one of the "Big Bad" or main Zombies.

As I start getting submissions, I'll try to keep everyone posted on what I still need. I can always use some of my own images if I don't have enough for a certain group.

As far as when I might need them by. I was thinking Halloween might be a good cut off point. But then I realized there will probably be some VERY good pics taken that night, so I want to give everyone at least a week past that to get pics to me. However, I'll actually start working on things immediately. Depending on the number of submissions, I'll probably know in a couple of days if we're talking just an expansion or an entire deck. Either way, I'll continue adding and filling in spots till I have it ready. If we're luck enough to get an entire deck before the cutoff date, I can always add an expansion to make sure everyone's included.

I can't wait to see what everyone comes up with! TTYL-Shootmenow 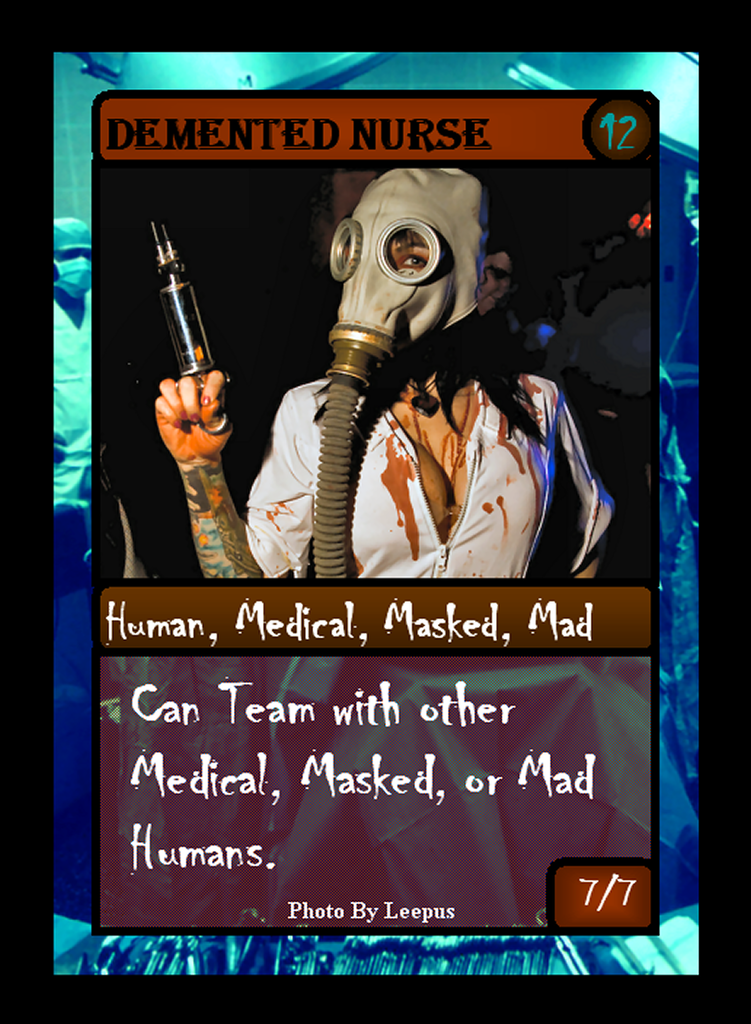 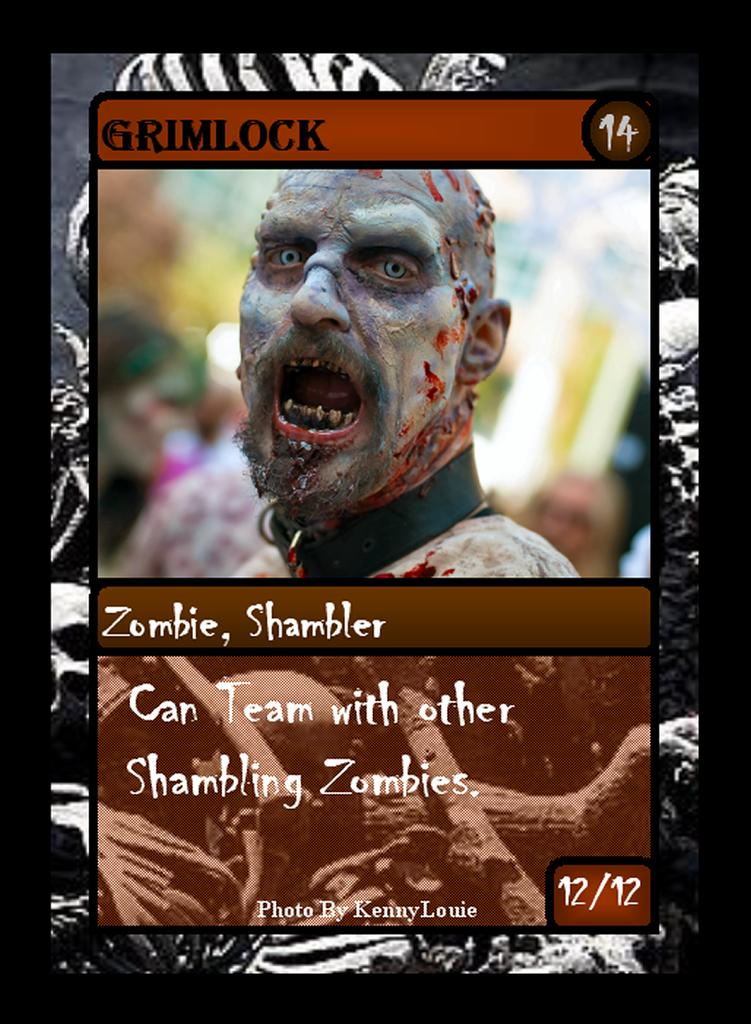 Comment by Komrad Venessa Wicked☭ on October 10, 2011 at 9:39pm
I just sent out a email blast with the link to your original blog. I want to see the Zombie photos as well! I will get you a photo ASAP! Thanks for the Wicked Deck!

I'm afraid it's been kind of a bust. I haven't seen any submissions for nearly 2 weeks now. With all the fantastic pics on WZ, I'm not sure why more people weren't interested. I'm still waiting till the week after Halloween to give as many people as possible a chance to hear about it and contribute, so we'll see. Hopefully it will start to pick up.

BTW- YOU still need to get me a good pic. There's really no reason to even do the set if you're not going to be in it ;-)

Comment by Komrad Venessa Wicked☭ on October 10, 2011 at 8:14pm
How are the photos going? I Love you pictures!