Flippin thru looking for interesting shit on google, and i found these! I think they are wickedly awesom, I think they should make a Marvel Vs. D.C. comics  ZOMBIE version of the video game, bet it would be badassssss!! 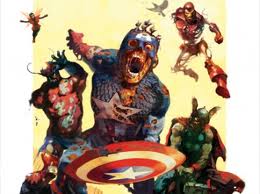 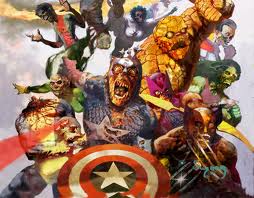 It's a student film short.  They just recently did a mock-behind the scenes interviews if they had it on dvd.  Check it out.

for kinda crappy 80's ffeel, the makeup and effect were really really good, they creeped me out! is it a real movie or was that just messin around kinda shit??

Well they look like they were going for that 80's horror movie feel to it.  Campy, yet cool.

tripple 6 that was fuckin cool as shit!! i don't know why i say that cus shit isn't actually cool... either way great find!!!!

When a zombie plague came from above, the Avengers arrived on the scene to end the crisis. With their infection the people of Earth-2149 stood no chance, as the entire world became engulfed by the plague. This is no world of heroes, this is a world of Marvel Zombies!

When the Sentry came from another dimension to that of Earth-2149, he carried an infection with him. This infection was a zombie plague, and when the Avengers of Earth-2149 arrived at the scene of the Sentry's arrival, he infected them all. Soon the Avengers would spread the plague to other heroes, and before long the entire world became either infected or devoured.

Before long though, the Marvel Zombies ran out of food. While some of the zombies such as Iron Man, Spider-Man, and Wolverine, gained the powers of Galactus, others stayed behind and used cloning technologies to continue eating. Years later, Iron Man, Spider-Man, Wolverine, and the others came back to Earth to find that Black Panther had survived and created a new life for the survivors of the plague, but it wouldn't be long until the hunger took over, and the zombies' plague spread.

A strange lightning in the sky struck New York. There it shows a zombified Sentry infecting the Avengers. The Avengers then went around eating the citizens and infecting other heroes/villains. All remaining heroes retreat to the S.H.I.E.L.D hellicarrier to plan for an attack on the zombies. Tony Stark and Reed Richards plan for a way to solve the problem but Reed goes mad and infects the Fantastic Four having the hellicarrier become infected. Stark makes a dimensional teleporter and has the remaining heroes escort it away while he gets infected. Nick Fury then decides to destroy the teleporter so the zombies will be stuck in this universe.

It didn't take long for the zombies to eat most of the population. The zombied heroes are still hungry, so they manipulate Reed Richards from the ultimate universe to build the dimensional teleporter that Stark created. The teleporter was made but was then destroyed by Magneto to once again prevent the zombies from infecting the ultimate universe.

Hell yeah! Chris has a Marvel Zombies shirt I bought him when we first met...aw, the good old days.