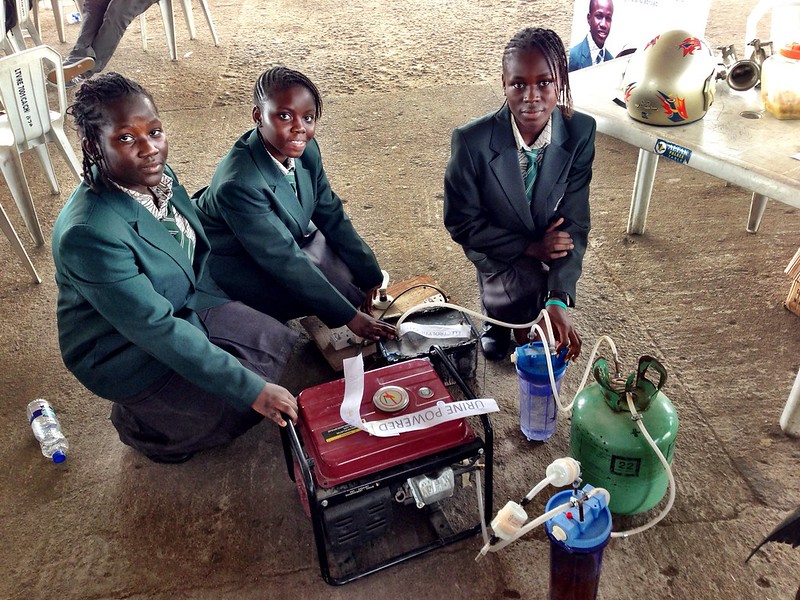 once again proving that kids are smarter then us four teenage girls in Africa created a way to make urine power a generator for maker-fair. by converting pee into hydrogen gas and then filtering it through several stages. the hydrogen can be pumped into a generator and one liter of urine can run it for 6 hours. the actual proses goes like this.

Along the whole way there are one-way valves for security, but let’s be honest that this is something of an explosive device…

so it may have some parts that need to be replaced eventually but it's a great way or reusing an already used, i.e. the water you drank. it also solves the issue of urine disposal cause what else are you going to do with it?! i would like to see this idea explained more refined and maybe see a few plans for it. i could see this being a great addition to an underground zombie bunker. it has a lot of pros not the least of it is that by the looks of the picture the whole unit could fit in a milk crate.

it also removes the harmful carbon monoxide produced by using gasoline. because as we know from hydrogen car burning hydrogen produces only clean water. meaning you could keep you generator inside, safe from thieves and clumsy zombies. hell it beats drinking filtered urine like the astronauts do. although if you wanted you could collect the water, drink it and complete the cycle. Recycling at it's best.

and if that wasn't enough to get you excited apparently the prototype cost only $64 dollars to make!

Almost four years ago a group of Nigerian teens unveiled a urine-powered generator at Maker Faire Africa in Lagos. Duro-Aina Adebola (14) , Akindele Abiola (14), Faleke Oluwatoyin (14) and Bello Eniola (15) developed a system where just one liter of urine will provide six hours of power supply, a topic that comes up again recently because of all the disaster relief from Hurricane Matthew. But how does the generator work, and is it really plausible that pee-produced energy can be the answer to all our fuel problems? Most likely no, but read on to understand why.

Here’s how the urine-powered generator works, as explained by the blog on the makerfaireafrica.com website:

• Urine is put into an electrolytic cell, which separates out the hydrogen.
• The hydrogen goes into a water filter for purification, and then into a gas cylinder, which looks similar to the kind used for outdoor barbecue grills.
• The gas cylinder pushes the filtered hydrogen into another cylinder that contains liquid borax, in order to remove moisture from the gas. Borax is a natural mineral, commonly used in laundry detergent.
• The hydrogen is pushed into a power generator in the final step of the process.

A big drawback is that hydrogen poses an explosion risk. But the girls used one-way valves throughout the device as a safety measure.

But Motherboard explains otherwise: “The machine is supposed work by filtering urine into water pure enough for the hydrogen to be extracted. That hydrogen is what powers the internal combustion engine in the generator that produces electricity. The only problem with this workflow is that it’s been widely proven that it takes more energy to split water molecules into hydrogen and oxygen atoms than the resultant hydrogen fuel is able to produce.”

Indeed, there are some definite roadblocks for the system (although one has to give credit for effort and ingenuity). However these young women aren’t the only ones who are pee-motivated.

Gerardine Botte, a professor of chemical and biomolecular engineering at Ohio University, is among those working on practical ways to make urine into a more useful hydrogen source, essentially by turning power into a byproduct of wastewater treatment. She comments on the girls’ project, saying it takes more energy to extract hydrogen from urine than you end up getting in return as electricity. The energy equation gets even more skewed by the inefficiency of the generator used in the girls’ project.
“At first glance, they’re not having a net gain in energy,” Botte says. “But I think it’s important to say that these little girls, trying to do something like this, deserve a lot of credit

Forbes writes about Botte’s own approach, which uses electrolysis of urea as a method of wastewater treatment. “She says her process for converting urine into potable water is more cost effective and more energy efficient than current wastewater treatment methods. Pure hydrogen is produced as a byproduct and can be used in generating electricity.”

“You cannot get net energy gain, but there is no more efficient way to get clean water from urine,” Botte says.

Botte founded E3 Clean Technologies in 2011 to work on scaling the process for use by municipalities and others. The U.S. Department of Defense is trying out a portable system from E3 at military bases in remote areas, as both a way to treat wastewater and generate power. The system, which Botte calls GreenBox technology, converts a soldier’s urine into drinking water.