They Feed (Bloodborne) A Zombie Apocalypse Novel, by Steve French

It came without warning, a deadly airborne virus has been unleashed upon the world, and the victims are dropping like flies. What’s worse, the infected are not staying dead, but returning to life with one desire. They rise from the dead to feast upon the flesh of the living! They drink your blood! They eat your skin! They Feed!

Kayla Gray was on her way to pick up her kids from school when the zombie outbreak began. When she arrived, the school was on lockdown, and she learned her kids had been transported to an military facility in Denver, Colorado. Teaming up with a group of other disgruntled parents, Kayla travels to Denver, from Colorado Springs, to find her children while trying to survive the wake of the outbreak.

The dead shall rise, the living shall fall…

They Feed is about the most unlikely of heroines to face a zombie apocalypse. The story is about a soccer mom, Kayla Gray; married mother of two children. She’s not only a house-wife and domestic diva, but also has her own business in photography. On the day of the viral outbreak, she was on her way to pick up her kids from school, but the school was on lockdown. After finding out that all the children were being relocated to a special shelter in Denver, Colorado; she decides that she must find them. With a bit of luck, she meets up with other survivors at a local refugee center, in Colorado Springs, who are missing their children as well. They team up and travel together out on the highway to Denver, but there will be much trouble along the way.

Having a fascination and love for all things zombie related, I have wanted to write a zombie novel for many years, but I’ve put the idea on the back burner to work on other projects. After finishing Sinister Presence, a supernatural thriller, I was excited and ready to start a new project and I had so many to chose from that were already in the works. I usually let my muse decide what I will work on; that is when Kayla came to me and told me that she was ready to tell her story. I took her words, ran with it, and six and a half pages of notes and a list of names suddenly became a full length novel.

I’ve been a fan of the zombie genre since watching my first zombie movie, Dawn of the Dead; by George Romero. The seeds for my inspirations may start there, when it comes to zombie fiction, and I’ve tried to remain true to the Romeroesqu zombie survival horror formula.

I believe the primary readers of this book will be those also fascinated by the zombie genre and those who love apocalyptic horror stories. My story isn’t so much about the zombies or the apocalypse as it is about the characters themselves and how they come to terms with what is going on around them. It is also how they each deal with the world falling apart and how they must adapt to the horrors that now surround them. It is also a story of teamwork and setting differences aside to complete the common goal of the group itself.

It didn’t take long to write this book, actually, even though the idea has been in my head for more than 15 years. It took off really, much on its own, with the help of my muse and the characters themselves. I’ve had the notes for a basic story and plotline setting around for a few years, but one day, after setting down at the word processor to write, Kayla began telling me about the story from her point of view, and I began to listen and write. Soon the other characters were coming to me and both excited and anxious to share their stories as well. In roughly two months, a zombie apocalypse story was started and finished.

Coming up with a title was tricky; I wanted something that sounded like a zombie story, something like Night of the Living Dead. So I began writing down title ideas. The Living Dead came to mind, but that was already used by a zombie anthology. Day of, Dawn of, Twilight of, Land of, etc. were all taken and I had too much respect for Romero to use something too close to any of his titles. One day, while watching a collection of B-horror movie trailers from the 70’s and 80’s, the title came to me after listening to a trailer voice-over. I started thinking about what the voice-over might say about my story if it were an old B-horror movie. I cam up with: They rise from the dead to feast upon the flesh of the living! They drink your blood! They eat your skin! They Feed! And my title was thus conceived.

The Cover Art was created to attract readers, of course, but as the old saying goes; you can’t judge a book by its cover. Still, you’ve got to get the book into the hands of a potential reader. The best way to do that is to have an attractive cover, so they’ll pick it up to look at it. Even if they don’t intend to buy, they are likely to turn the book over to read the back next. The back cover is your chance to sell the book with a general introduction and premise. Using licensed clip-art, I was able to create an attractive book cover for this novel.

The hardest part of writing this book, as well as writing any other, is the challenge of avoiding the myriad of distractions available in my home, because I am also a gamer. Staying motivated and keeping the writing a priority can be hard to do when there is so much going on around you. I count my writing as my career and full-time job, so I must place it as a high priority in my life. Managing time for family and friends must also be considered as well. For the gaming, I reserve time for that when I have reached a temporary road-block in my creative processes. There are times when writing a scene doesn’t feel like it’s flowing smoothly and forcing a story can really ruin the feel of it; that is break time.

There was research necessary for this book. Stan, one of the characters in the book, is an ex-Marine. I was Navy and spent all my service time on an Aircraft Carrier, so I know next to nothing about combat. Turning to a friend, who had served in combat with the Marines, I was able to ask all the questions I needed to know the answers to about how Stan might handle any given situation using military protocols. I also did some research on viruses, bacteria, and meteorites. Most of the research entailed examining the zombie genre itself and studying the formulas used in survival horror story writing.

I always learn from my stories; usually the research involved leads to education on some level or another. With every book or story that I write, I learn more about grammar, formatting, and add new words to my vocabulary.

What do I want to say to my readers? I don’t know, but Kayla does. Here is an excerpt from the book that would best explain what Kayla has to say…

"If we want to live, we can’t waste time looking back on those who have died. It will only hold us back," Stan explained. "And things are going to have to be different from now on if we expect to survive. We can’t let our emotions get in the way anymore. We got to kill or be killed. No more crying. No more games. It’s a war; us against them. It’s as simple as that. Survival of the fittest."

"If what you say is true, than what do we really have left to fight for?" Kayla asked.

"Survival of the fittest is not survival if nothing survives but the animal aspects of our nature. Nothing is worth fighting for if not the fight for the preservation, not of one’s self, but for the preservation of our humanity and everything that makes us human. We must hold our emotions sacred, even more so now than ever before. We need fear, happiness, sadness, anger, kindness, generosity, and even love. Those are emotions that must survive. If not, we become like them," Kayla explained. "Without emotion, we are no different. If we give up on all that keeps us going, if we surrender our feelings and desires, we end up just like them. We become zombies."

They Feed (Bloodborne) is available in paperback and for kindle at amazon.com. There is also a cheap/free teaser companion available for kindle that includes a sample chapter and other goodies related to the novel.

Your book looks worth the read. 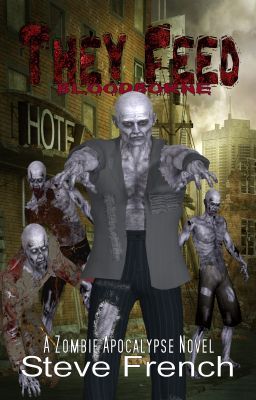