A couple of weeks ago William Bibbiani, a writer over at Blumhouse, wrote an article celebrating contemporary Masters of Horror. Among those celebrated were James Wan, Guillermo del Toro, Chan-Wook Park, Lucky McKee and Adam Wingard (I would have added Mike Flanagan, but that’s just me). All of these directors have made great films. They have also made some not-so-great films. Out of all of them, Wan is the one who has emerged to be the most impressive and important horror director of the last 20 years (no offense to the others intended). To give credit where it’s due: much of Wan’s success must be owed to the handful of scripts written by Leigh Whannell, but Wan simply shines as a director (and screenwriter) and deserves to be ranked with John Carpenter, George A. Romero and Dario Argento as a Master of Horror.

First, let’s look at the criteria. Bibbiani posits that in order to be considered a Master of Horror, the director must meet all of the following criteria:

Let’s start at the top, shall we? Wan has directed eight feature length films, six of which have been horror films.  His directorial debut was for the low budget horror film Stygian, about a couple who get trapped in another world known as Exile. First, I have tried to find a copy of this, be it hard copy or digital copy, and it just doesn’t seem to exist. It was from his early days in Melbourne, Australia and has apparently fallen off the face of the earth (James if you’re reading this, I would love a copy).

After the success of Saw, Wan opted not to direct the sequel (or any of them, for that matter) and instead turned his attention to Dead Silence in 2007, also co-written by Whannell. While far from a terrible film, it was the result of forced creativity due to a deal brokered by Wan and Whannel with their agents in case Saw was a flop. Basically, they promised a second film but had no ideas in mind for a script, so Whannell locked himself in his apartment and churned out a script. Their hearts clearly aren’t in the film and it shows. They got as much mileage out of those creepy ventriloquist dolls as they could though. 2007 also saw the release of Death Sentence, the Kevin Bacon revenge thriller that would be Wan’s first foray into a genre outside of horror. Based on the novel by Brian Garfield (which was his sequel to Death Wish), the film was a critical and commercial flop. This prompted Wan to take a break for a few years before returning to his horror roots with Insidious in 2010.

Insidious was when the world knew that Wan wasn’t just a one-trick pony. Wan knew that Saw is what people knew him for, and he didn’t want his name to be synonymous with blood and gore. Thus, Insidious was born. Once again working off a script by Whannell, Wan wanted to make a horror movie that used actual scares to terrify the audience, as opposed to viscera. He succeeded, as Insidious remains one of the best and most terrifying films to be released in the last decade (and that third act is amazing, screw the haters).

In 2013 Wan served us his one-two punch of The Conjuring (released in July) and Insidious: Chapter 2 (released in September). As many people already know, The Conjuring is a near-perfect film that doesn’t necessarily reinvent the wheel of modern horror, but spins the wheel remarkably well. It is Wan’s best-reviewed film and finally got mainstream audiences and the majority of critics to finally see Wan’s talent.

Insidious: Chapter 2, on the other hand, was a slight misstep for the director. While by no means as atrocious as the reviews would have you believe, it is goofier than the first film, giving a lackluster backstory to the first film’s secondary villain The Bride in Black. The film tied in with the first film well, but at the end of the day it’s just an inferior sequel. If you haven’t tried it yet, I would highly recommend watching it back-to-back with Insidious, as it works far better viewing those two movies as one (which is what Wan intended anyway).

He left the genre again to film Furious 7, the latest installment in the Fast and the Furious franchise. It was here that he had to deal with the tragic death of Paul Walker mid-production while also focusing on making a good movie. Audiences seemed to think he did a great job, as that sequel went on to gross $353 million domestically, the most of any movie in the franchise. It’s sad to say that Walker’s death no doubt had a large impact on the box office returns, but it at least proved that Wan was capable of delivering a solid film that wasn’t a horror movie, even amidst a tragedy.

This brings us to 2016, when Wan returned to the horror genre again with The Conjuring 2 (read my review). It would be understandable to assume that Wan would pull out another Insidious: Chapter 2 on us, but if you’ve seen the film you know very well that that is not the case. The Conjuring 2 is a great film, let along a great sequel. He brought back characters the audience loves while still managing to scare the pants off of them.

Apologies for the lengthy history lesson, but it is important to fully grasp all that Wan has achieved during his 12 years in the film industry in order to understand his significance to the horror genre. . This isn’t even taking into account the horror films that Wan has served as producer on (all of the Saw sequels, Annabelle, Demonic, the upcoming Lights Out).

What makes Wan so important is that he is putting horror in the public’s eye without compromising his vision. More often than not, you see studios toying with horror films until the original vision is unrecognizable (just look at 2011’s The Thing or Fincher’s Alien 3). Wan has proved that he knows what he is doing, and studios are just letting him roll with it. With the exception of Dead Silence, Wan is in complete control of the film he is working on. So specific is his directing stile that you would be able to tell that you are watching a Wan-directed film even if you didn’t know it going in.

While a lot of this is due to the scripts that Wan has had to work with (some of which he has co-written), it is a testament to his skills as a director that he is able to deliver characters that the audience actually cares about. Whether it’s Ed and Lorraine Warren or the Lambert family, Wan has created characters that the audience empathizes with, a trait in horror films that too often gets forgotten.

While box office success isn’t necessarily a factor that should determine a Master of Horror, it is still important to note that Wan’s films are delivered to the mainstream and watched by them. Independent horror is a wonderful contribution to the genre, but more often than not those films aren’t as easily accessible to audiences. It is important for a Master of Horror to have his or her films seen by a wide audience in order to keep horror in the public eye (and have them see that it can be good).

The key to Wan’s success is consistency and frequency. Wan doesn’t stop churning out movies and the fact that most of them are as good as they are is a testament to Wan’s talen as a director. All of the Masters of Horror that Bibbiani mentioned have had some issues with consistency. Del Toro has hit a bit of a slump recently with Pacific Rim and FX’s The Strain. With the exception of The Woman, McKee hasn’t made a decent movie since May in 2002.

Wingard has made some strong films (the best being 2011’s You’re Next), but they aren’t in the public eye nearly as much as Wan’s are. Of course, this may all change if early reactions to The Woods are to be believed. Bear in mind, I’m not saying that Wingard’s tendency towards indie projects is a negative (as I mentioned above), but that does mean that less people are exposed to his work.

I brought up Flanagan because he has yet to make a bad film (Oculus and Hush haters gonna hate). His debut feature, Absentia, is particularly impressive. It’s too early to call him a Master of Horror though. We’ll have to see where his career takes him in a few years (though if he’s able to make a good Ouija film he may seal the deal right there).

To top it all off: Wan is nice. Seriously, have you ever seen this guy in an interview? It’s clear that he has an insane amount of passion for his work. He gets so excited when talking about his films that you can’t help but be excited for everything he gets his hands on. This isn’t to say that the other directors that Bibbiani mentioned aren’t nice as well, but they lack the charisma that Wan exudes.

James Wan will be leaving the horror genre for a while to turn his attention to Aquaman (which is the main reason to believe that it won’t be terrible), but one hopes that he returns to the genre that he is best at directing after that. The genre (and fans of the genre) need him.

What are your thoughts on Wan. Do you agree that he is the most important horror director working in the industry today? Or do you think someone else deserves the title? Let us know in the comments below! 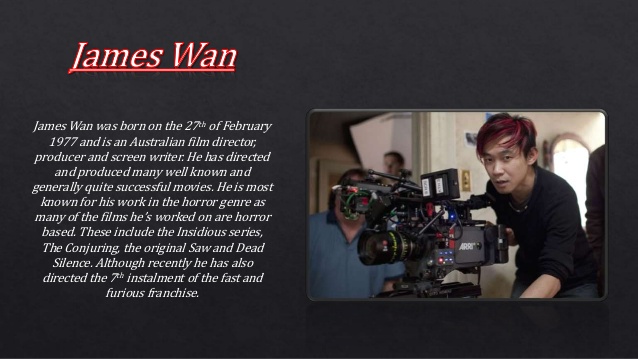