All right, you primitive screwheads, listen up! Exhumed Films and The Mahoning Drive-In are teaming up to bring you the baddest, bloodiest big-screen bash of the summer! On August 28-29, we are thrilled to present THE BRUCE CAMPBELL KEEP YOUR DISTANCE TOUR, hosted by the Commander-in-Chin himself, Bruce Campbell! That's right, the legendary genre icon will join us on the drive-in lot for a full weekend showcasing some of his greatest feature films. Bruce will conduct a live, on-site Q & A each night before the marathon, which will be broadcast on the Mahoning's huge screen so you can watch and listen via FM radio from the safety and comfort of your vehicle!
‍
The weekend lineup will include fan favorites such as THE EVIL DEAD trilogy and BUBBA HO-TEP, as well as some of Bruce's deeper cuts! We will round out the marathon programming with classic horror trailers and some rare short films; all films and trailers/shorts will be projected in a combination of 35MM and digital media. There will also be merchandise tables with horror movie t-shirts, Blu-rays, and memorabilia set up on the drive-in lot, as well as costume contests and prize giveaways on both Friday and Saturday night. Its going to be a wild weekend and a bloody good time!
The feature film lineup is as follows:
FRIDAY, AUGUST 28:
EVIL DEAD
BUBBA HO-TEP
MY NAME IS BRUCE
SATURDAY, AUGUST 29:
EVIL DEAD 2
ARMY OF DARKNESS
MOONTRAP 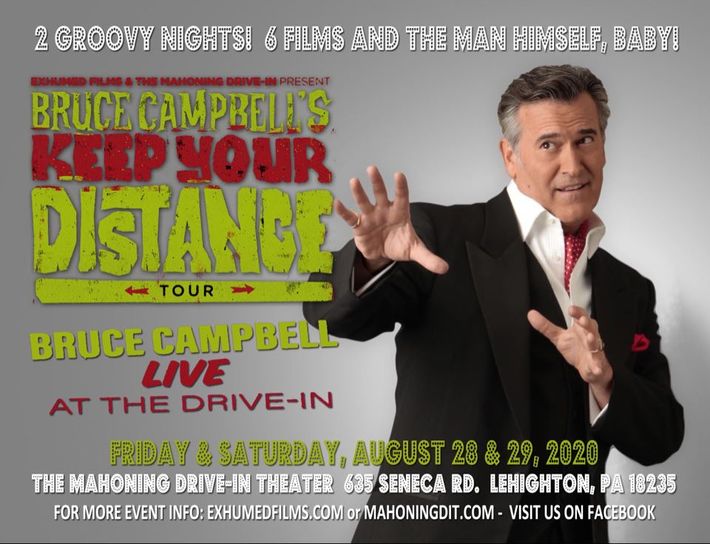 RSVP for THE BRUCE CAMPBELL KEEP YOUR DISTANCE TOUR to add comments!